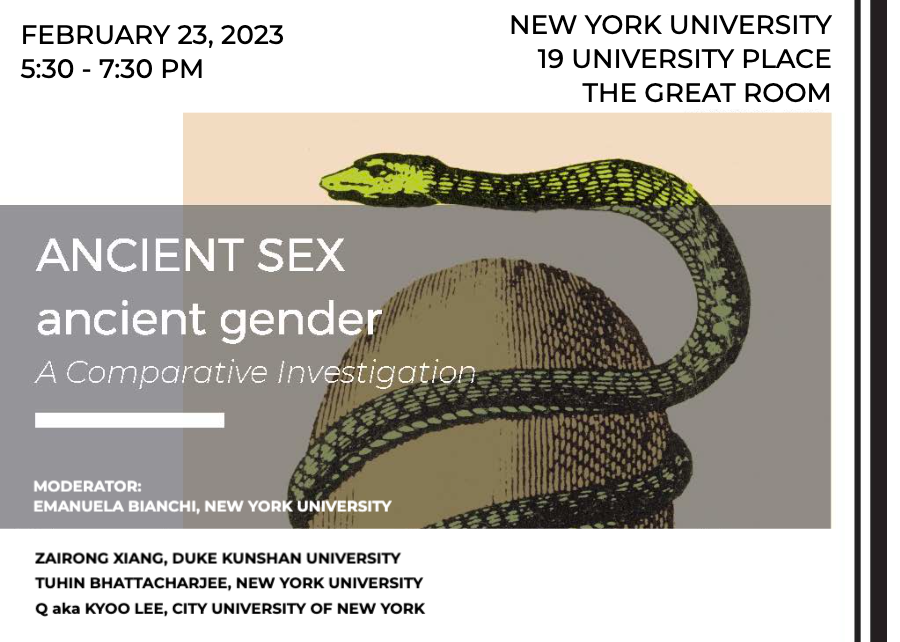 This in-person event is open to the public - advanced registration and proof of compliance with NYU's vaccination policy is required for non-NYU visitors. Instructions for accessing campus will be sent to you upon registration: RSVP HERE

This symposium wagers that any impulse to investigate origins, an impulse surely animating the study of the ancient world, will inevitably encounter the problematic of sexual difference. Bringing together three comparative literature and philosophy scholars with expertise across Ancient China, Mesopotamia, India, Mesoamerica, and Greece, this international, comparative, decolonial, queer symposium will engage speculative poetics to encounter anew questions of sexual difference and sexuality across the ancient world.

Tuhin Bhattacharjee is a PhD Candidate in Comparative Literature at New York University. His research brings together ancient Greek and Sanskrit texts—as well as their receptions in Bengali literature and 20th-21st century feminist and queer theory—in order to investigate figurations of desiring mothers in antiquity. He recently received the NYU Mainzer Fellowship 2021, and his essay was awarded the Honorable Mention for Best Graduate Essay 2022 by the John J. Winkler Memorial. Tuhin is currently an Educational Ambassador for Save Ancient Studies Alliance (SASA). His recent essays have appeared in philoSOPHIA: A Journal of transContinental Feminism (SUNY Press) and the Journal of Comparative Literature and Aesthetics.

Kyoo Lee aka Q is a philosopher, writer, critic and a Professor of Philosophy and Gender Studies at the City University of New York, who works widely in the interwoven fields of the Arts and Humanities. The author of Reading Descartes Otherwise (FUP) and a forthcoming book on visual philopoetics (MIT Press), she is a recipient of faculty fellowships from Cambridge University, KIAS and the Mellon Foundation among others, and her genre-bending writings that explore co-generative links between critical theory and creative prose have appeared in Asian American Literary Review, The Brooklyn Rail, Flash Art, Jacket 2, PN Review, Randian, The Volta and the White Review as well as numerous academic journals and books. Actively engaged in various curatorial and public intellectual projects, recently she served as the editorial manager for the Korean Pavilion at the Venice Biennale 2022, a judge for the Poetry Translation Prizes at the Poetry Translation Center (London) and PEN America (NYC), and the faculty leader for the Mellon Seminar at the CUNY Graduate Center, “mp3: merging poetry, philosophy, performativity.” Currently, she is the coeditor of philoSOPHIA: A Journal of transContinental Feminism, and in 2022 Society for Phenomenology and Existential Philosophy (SPEP) established “The Kyoo “Q” Lee Prize for Best Paper on LGBTQ Issues in Philosophy.”

Zairong Xiang is Assistant Professor of Comparative Literature and Associate Director of Arts at Duke Kunshan Univeraity. He is author of Queer Ancient Ways: A Decolonial Exploration (2018, punctum books). His writings have appeared in academic journals such as TSQ and Feminist Theology, as well as media platforms like OpenDemocracy and e-flux. He has also co-edited special issues of GLQ and New Art. He is a curator of the current exhibition "Ceremony (Burial of an Undead World)” at the HKW Haus der Kulturen der Welt in Berlin. ). He has co-curated the “2021 Guangzhou Image Triennial,” and has curated the “minor cosmopolitan weekend” at the HKW (2018) and edited its catalogue minor cosmopolitan: Thinking Art, Politics and the Universe Together Otherwise (Diaphanes 2020). He is currently pursuing two projects, dealing, respectively, with the concepts of ‘transdualism’ and ‘the counterfei in China and Latin America.’

This event is co-sponsored by the Center for Ancient Studies, the Program in Poetics & Theory, the Department of Classics, and the Center for the Study of Gender & Sexuality. 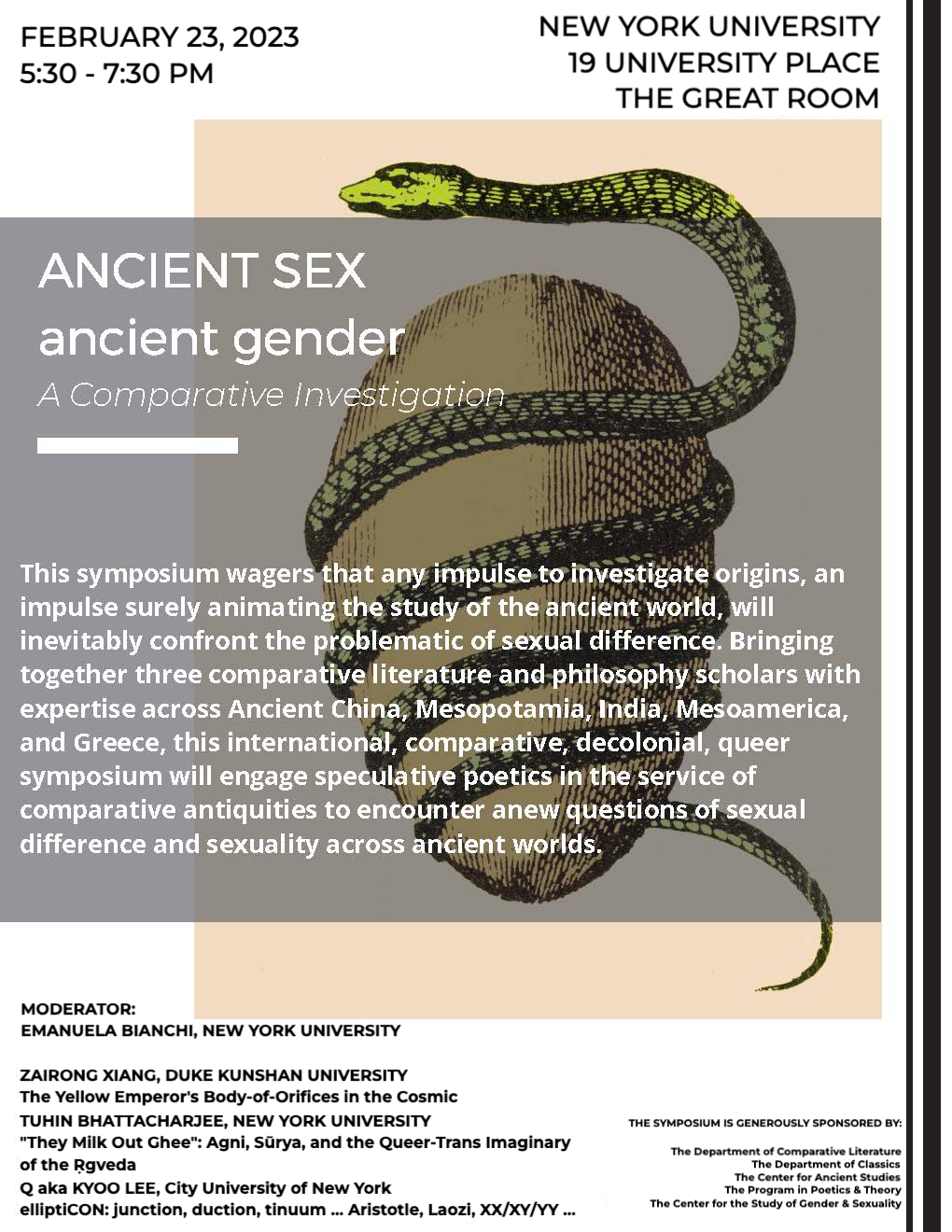