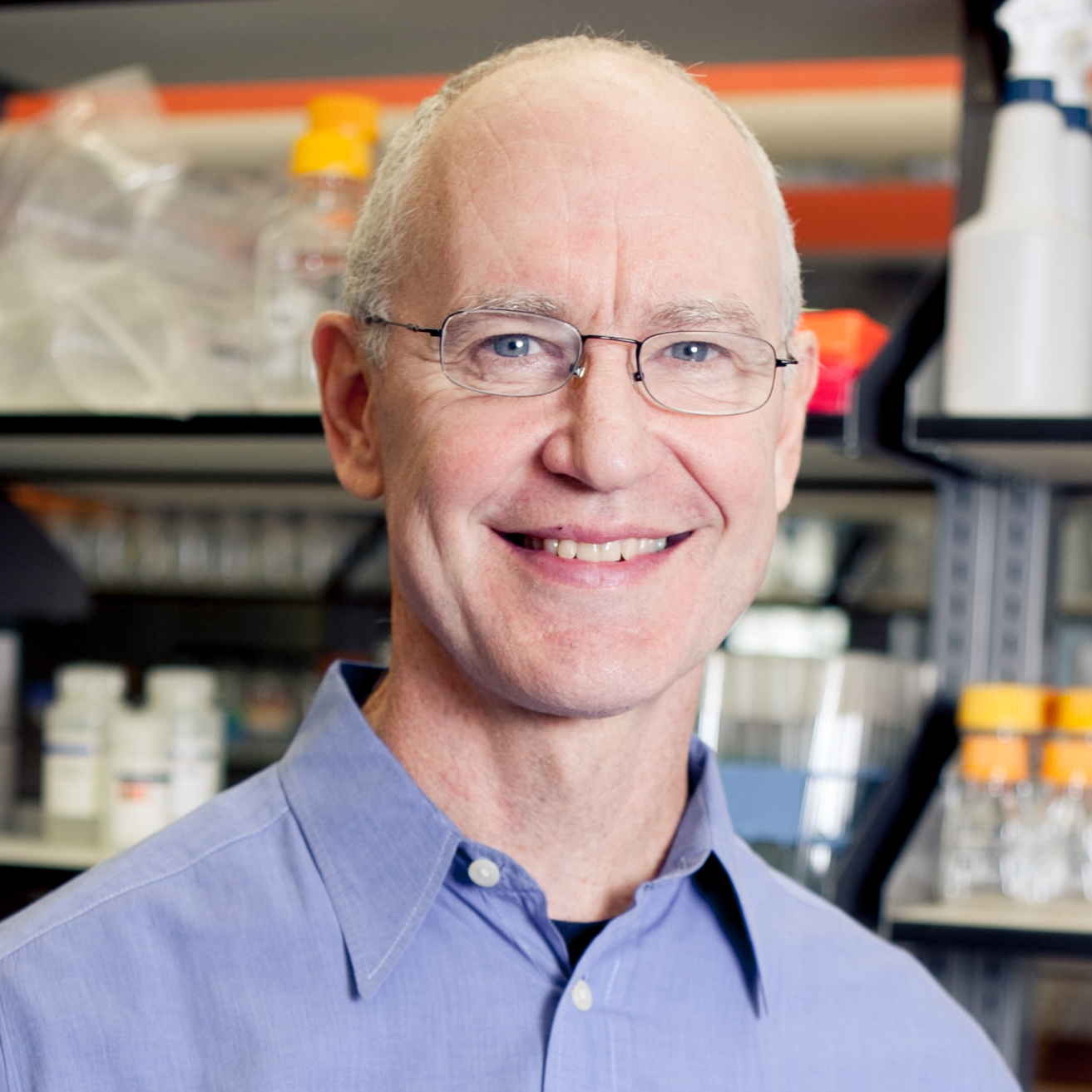 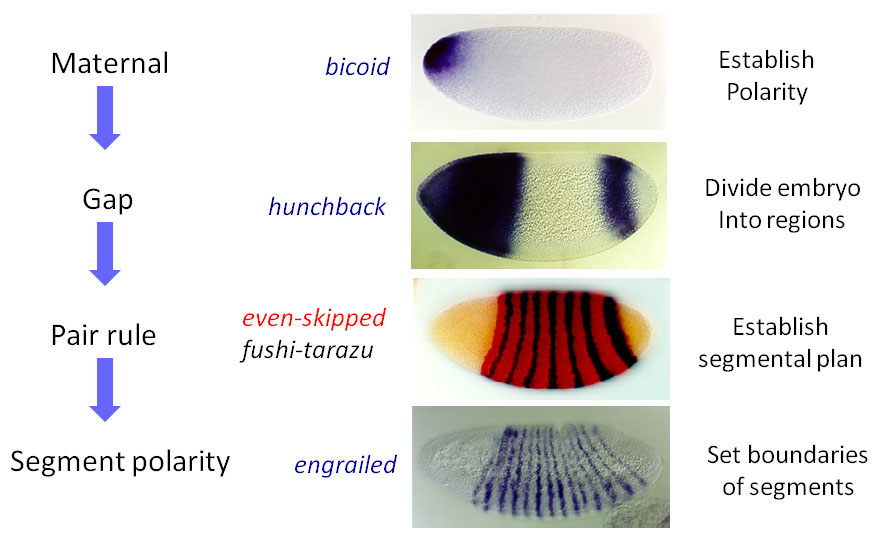 Our main goal is to understand the molecular mechanisms that establish the body plans of multi-cellular animals. In the fruit fly Drosophila melanogaster, many genes that control body form were identified more than 25 years ago. Most of these genes encode transcription factors that are expressed in bands or stripes at specific positions along the anterior posterior axis. They are organized into a hierarchical network that creates finer and finer striped patterns, which eventually foreshadow and control the placement of body structures of the larval and adult stages of this animal (Figure 1).

In many cases, different parts of each gene’s transcription pattern are controlled by cis-acting regulatory elements (enhancers) that contain binding sites for factors positioned higher in the hierarchy. By understanding how these elements work, we hope to understand the molecular mechanisms involved in position-specific activation and repression of transcription. Since many of the transcription factors we study in fruit flies are evolutionarily similar to factors in higher eukaryotes, understanding how they work in Drosophila should provide us with profound insights into developmental mechanisms in other insects and higher animals including humans. 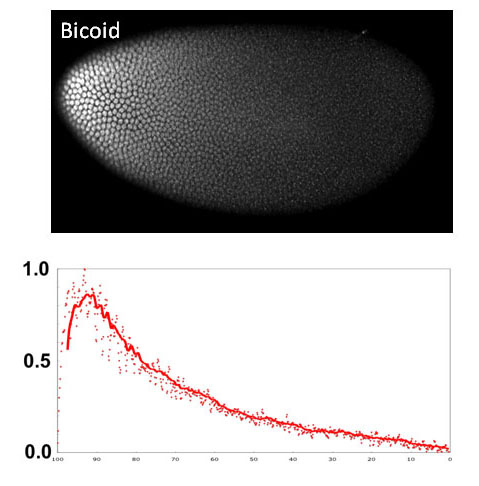 Testing Morphogen Hypotheses: One of the most enduring concepts in the field of developmental biology is the idea that expression gradients contain multiple thresholds that control and position different cell fates. To rigorously test this idea, we are carefully measuring the spatial relationships between potentially morphogenetic gradients and the positions of their target gene expression patterns. In parallel, we use genetic experiments and transgenic technologies to precisely manipulate these gradients. In our first experiments, we have focused on the Bicoid gradient (Figure 2) and on gradients of transcription factors encoded by the gap genes hunchback, Kruppel, knirps, and giant. These experiments are focused on three simple questions: First, do gradients really function as morphogens? Second, is there a specific range of concentrations that contains the important thresholds of the morphogen? Third, how many discrete thresholds can be set by a single gradient?

In our first experiments, we have used genetic experiments to flatten the Bcd gradient, and then measured the amounts of Bcd required for activating specific target genes. Surprisingly, we have found that all tested target genes can be activated by lower concentrations than those present in the wild type gradient where boundaries for those genes are formed. These results suggest that Bcd concentrations are in excess at each position within the wild type gradient, which challenges the strict interpretation of the morphogen hypothesis. Our working hypothesis is that there are repressors that interfere with Bcd-dependent activation, and that combinations of activating and repressing proteins position and register multiple target gene expression boundaries.

Defining the Bicoid-dependent transcription network. Bicoid is a homeodomain-containing transcription factor that is expressed in a long-range anterior gradient in the early embryo (Figure 2). Loss of Bicoid function leads to a mutant embryo that lacks all head and thoracic structures. Previous studies and our recent work have identified more than 50 target genes that are directly activated by Bicoid. Activation of each target gene involves direct binding of Bicoid to one or more enhancers that appear as rather tightly linked clusters of Bicoid-binding sites. These enhancers direct expression patterns at different positions along the anterior posterior axis (Figure 3), and a major goal is to understand the cis-regulatory logic that controls the differential positioning of different target genes.

We are using an integrated approach in pursuit of this goal. First, we use bio-informatics methods and published ChIP-Chip data to identify all clusters of Bicoid-binding sites that are similar to those in the known target genes. Candidate clusters are cloned into reporter genes, transformed into the genome, and tested for in vivo activity by in situ hybridization experiments.

While collecting an ever-growing number of Bcd-dependent elements, we are using data mining techniques to identify sequence motifs or binding site arrangements that correlate with target gene positioning. Among the most over-represented sites in a specific group of enhancers appears to be a binding site for the Run transcription factor, which is expressed in a gradient that spatially opposes the Bcd gradient. We are currently testing this hypothesis using genetic, biochemical, and transgenic assays.

Defining Functions of Individual Bicoid Target Genes. How individual Bicoid target genes function in anterior patterning has been impossible to address because removal of Bicoid function abolishes the expression of all target genes. However, in recent years, we have developed a transgenic system for expressing an anterior gradient of any protein in embryos lacking Bicoid altogether. This approach is being used to systematically assay the activities of the known target genes. Our results suggest that some genes are involved primarily in repressing posterior organizing genes in the presumptive head regions, while others are involved in transducing the specific instructive activities that lead to the formation of individual anterior segments. These studies are particular interesting in light of the fact that the bicoid gene is not well conserved, even among insects.

The Nitty-Gritty of Enhancer-mediated Transcriptional Mechanisms: In our previous work, we have defined a detailed model for the regulation of a single stripe of expression in the early embryo (even-skipped (eve) stripe 2). The basic strategy is to use DNA-binding experiments and evolutionary conservation to define all sequence motifs in an individual enhancer. These motifs are tested by in vitro mutagenesis in the context of reporter genes. Transacting factors that bind to novel motifs are identified using yeast one-hybrid screens.

We are currently focused on a 500 bp enhancer element that forms two stripes (eve 3 and eve 7) in the early embryo (Figure 4). So far we have identified more than 25 binding sites in this enhancer. By manipulating these sequences and the spacing between them in detail, we hope to further augment our understanding of how these DNA sequences integrate the combined effects of different combinations of regulatory factors.

These projects are currently funded by grants from the NIH and NYU’s Research Challenge Fund.

Stephen Small received his PhD in developmental biology in 1988 from the University of Cincinnati. For his thesis research, he worked with Dr. Richard Akeson on the structure and function of different NCAM polypeptides in rat development. NCAMs are cell adhesion molecules that are critical for establishing connectivity in the developing nervous system. From 1989-1993, he worked as a post-doctoral fellow at Columbia University and at UC San Diego with Dr. Michael Levine on the patterning mechanisms that establish the body plan in Drosophila. He joined NYU's Biology Department in 1993 as an assistant professor, and continues to study how genes control the establishment of different body forms.

Dr. Small is the current Chair of NYU’s Department of Biology. He has also served as Director of Graduate Studies, and is involved in teaching both undergraduate and graduate students. At the undergraduate level, he teaches an upper level majors course in Developmental Biology, and a course in Human Genetics for non-majors. He has also participated in teaching in the department’s core courses, such as Principles of Biology and Molecular and Cell Biology. At the graduate level, he teaches several lectures in the Biocore series, and in Foundations of Developmental Genetics I and II, the core course for the Developmental Genetics program with NYU’s School of Medicine.

Genetics Society of America, American Association for Advancement of Science