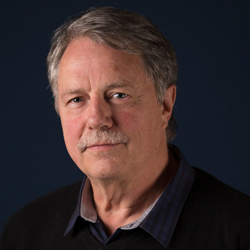 One of our most exciting projects concerns the stochastic distribution of two types of unit eyes (ommatidia), which is reminiscent of the stochastic distribution of blue, red and green cones in the human retina. We discovered that the stochastic expression of the transcription factor Spineless, in a subclass of R7 photoreceptors is responsible for this choice. After studying the genetic network that controls fate determination of each class of photoreceptors, we discovered the mechanisms by which each allele of spineless makes an independent choice, while later communication between alleles across different chromosomes allows the coordination of expression within a given cell. We are now extending this work to look at the evolution of these stochastic choices. We have shown that butterflies and wasps have two R7 cells that make choices between blue and UV opsins, leading to four possible combinations that are entirely determined by spineless: Disruption of spineless in butterflies or wasps with CRISPR leads the two R7 photoreceptors to always express a single Rhodopsin. Our most recent work has shown how the stochastic choice in R7 gets propagated to its targets: two types of Dm8 target neurons are specified deterministically but only those that receive input from their cognate R7 survive, mediated by Dpr11 and its partner DIPg that are parts of families of cell adhesion molecules. Supported by NIH R01 EY13010.

Generation of neural diversity: the development of the optic lobes

To understand the generation of neuronal diversity, we focused on the optic lobes, which with 60,000 neurons, drives the sophisticated visual function of Drosophila that allows it to perform acrobatic flying at high speed. We defined the nearly 200 cell types that compose the optic lobes, forming 800 parallel circuits corresponding to the 800 unit-eyes (ommatidia) that form a precise ‘retinotopic’ map. To understand how cell types in the medulla, the largest optic lobe neuropil, are produced, we discovered a temporal series of transcription factors expressed sequentially in 800 neuroblasts that each produces at each temporal window the different neurons that form each of the 800 circuits. This work provided a generalization of the model of temporal patterning that also applies to temporal patterning in the vertebrate retina or cortex. We also discovered that the temporal factors not only determine neuronal fate but also death or survival: at a certain temporal window, NotchON neurons die by apoptosis while at other temporal windows, it is the NotchOFF progeny that dies. Neuronal diversity is further increased by spatial transcription factors that modify the temporal series in neuroblasts to produce locally a smaller number of neurons that innervate multiple columns. Our recent studies with single cell mRNA sequencing led us to discover the rules that direct the developmental and terminal differentiation of optic lobe neurons, in particular their neurotransmitters. This work is supported by EY017916.

We have also analyzed the function of medulla neurons that participate to the neural network for motion vision. Two sets of neurons mediate responses to bright edge motion, with one of them delayed as compared to the other as to allow coincidence detection of stimuli from two neighboring photoreceptors. Two other pairs of neurons do the same for dark edge motion and represent the implementation of the famous Reichardt Elementary Motion detector first described in the 50’s. Through our studies of the development of lamina the neurons that receive input from photoreceptors and split their signal into the dark- and bright-edge motion pathways, we uncovered a critical role for glial cells during neuronal development, which serve as a signaling relay to precisely pattern the five types of lamina cells in response to signals from photoreceptors. Finally, we analyzed the development of the first motion sensitive neurons (T4 & T5) that integrate local motion information to control global motion. We discovered how a specific mode of neurogenesis allows the production of 8 neurons tuned to each of the four cardinal directions that project precisely to the same points of the retinotopic map. Supported by NIH R01EY13012

Aging is a process of progressive decline in intrinsic physiological functions. A molecular and genetic understanding of aging has recently emerged. For instance manipulation on the insulin pathway and of epigenetic marks in C. elegans,Drosophila and mice can significantly extend their life span. There is also a trade-off between lifespan and reproduction as higher reproductive activity in females is normally associated with shorter lifespan.

We are studying Harpegnathos, an ant species that represents a powerful system to study lifespan extension. In this ant, individuals that are not exposed to queen pheromones can undergo a reversible switch from non-reproductive workers to reproductive pseudo-queens (‘gamergates’) that exhibit fully developed ovaries and, importantly, a 5-10X increase in lifespan: this means that an individual born to live for months can now live for years, presumably by changing its epigenetic profile. Furthermore, gamergates can be reverted to workers when placed in a colony with a queen and then revert to a shorter lifespan. Therefore, this species provides a unique system to understand environment-induced aging and rejuvenation processes.

We have developed genetics in Harpegnathos ants to investigate the regulatory system underlying the plasticity of longevity. We have identified a group of differentially expressed genes (DEGs), including dramatic changes in genes implicated in the regulation of longevity, insulin and IGF signaling pathway components. We have generated CRISPR mutants for the orco gene, which encodes the obligatory co-receptor of all Olfactory Receptors, rendering the ant unable to perceive pheromones that allow communication in the ant society. Strikingly, these orco mutant ants become asocial and fail to become reproductive. We have analyzed the dynamics of insulin signaling during the transformation to gamergates. Insulin is increased systemically, presumably to support the heavy metabolic load for egg production; however, the fat body (aka adipose tissue where insulin needs to be low in flies and mammals to extend lifespan) and ovary appear to have decreased insulin response because of anti-insulins produced locally, hence potentially explaining how social ants can increase reproduction while extending their lifespan.

We have in hand a unique system that exhibits extreme forms of reversible aging and rejuvenation and have successfully developed the genomic and genetic tools to study the process at the molecular levels.