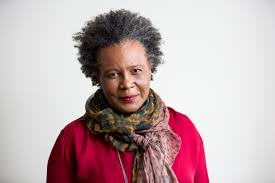 Claudia Rankine is the author of six collections of poetry and essays, including Just Us: An American Conversation, Citizen: An American Lyric and Don’t Let Me Be Lonely; three plays including HELP, which premiered in March of 2020 at The Shed, NYC, The White Card, which premiered in February 2018 (ArtsEmerson/ American Repertory Theater) and was published by Graywolf Press in 2019; as well as numerous video collaborations. She is also the co-editor of several anthologies, including The Racial Imaginary: Writers on Race in the Life of the Mind (FENCE, 2015). In 2016, she co-founded The Racial Imaginary Institute (TRII). Among her numerous awards and honors, Rankine is the recipient of the Bobbitt National Prize for Poetry, the Poets & Writers’ Jackson Poetry Prize, and fellowships from the Guggenheim Foundation, the Lannan Foundation, the MacArthur Foundation, United States Artists, and the National Endowment of the Arts. A former Chancellor of the Academy of American Poets, Claudia Rankine will join the NYU Creative Writing Program as a tenured Professor in Fall 2021.

Deborah Landau is the author of four collections of poetry: Soft Targets (winner of the 2019 Believer Book Award), The Uses of the Body and The Last Usable Hour, all Lannan Literary Selections from Copper Canyon Press, and Orchidelirium, selected by Naomi Shihab Nye for the Robert Dana Anhinga Prize for Poetry. Her other awards include a Jacob K Javits Fellowship and a Guggenheim Fellowship. The Uses of the Body was featured on NPR's All Things Considered, and included on "Best of 2015" lists by The New Yorker, Vogue, BuzzFeed, and O, The Oprah Magazine, among others. A Spanish edition was published by Valparaiso Edicíones in 2017. Her work has appeared in The New Yorker, The Paris Review, American Poetry Review, Poetry, The Wall Street Journal, The New York Times, CNN, and The Best American Poetry, and included in anthologies such as Resistance, Rebellion, Life: 50 Poems Now, Please Excuse This Poem: 100 New Poets for the Next Generation, Not for Mothers Only, The Best American Erotic Poems, and Women's Work: Modern Poets Writing in English. Landau was educated at Stanford University, Columbia University, and Brown University, where she received a Ph.D. in English and American Literature. She is a professor and director of the Creative Writing Program at New York University.

Claudia Rankine: A Reading and Conversation