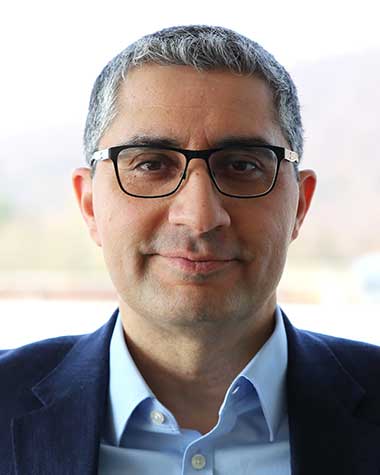 Cells and microorganisms produce and consume all sorts of chemicals, from nutrients to signalling molecules. The same happens at the nanoscale inside cells themselves, where enzymes catalyse the production and consumption of the chemicals needed for life. In this work, we have found a generic mechanism by which such chemically-active particles, be it cells or enzymes or engineered synthetic colloids, can "sense" each other and ultimately self- organize in a multitude of ways. A peculiarity of these chemical-mediated interactions is that they break action-reaction symmetry : for example, one particle may be repelled from a second particle, which is in turn attracted to the first one, so that it ends up "chasing" it. Such chasing interactions allow for the formation of large clusters of particles that "swim" autonomously. Regarding enzymes, we find that they can spontaneously aggregate into clusters with precisely the right composition, so that the product of one enzyme is passed on, without lack or excess, to the next enzyme in the metabolic cascade.