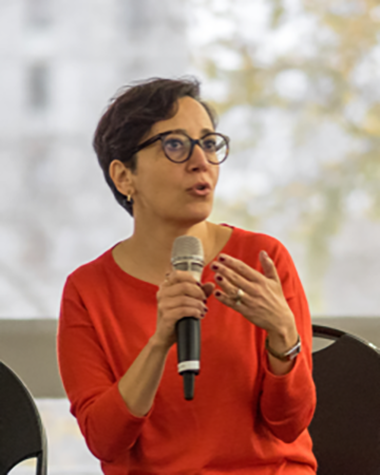 The physics of cement cohesion

Cement is the main binding agent in concrete, literally gluing together rocks and sand into the most-used synthetic material on Earth. However, cement production is responsible for significant amounts of man- made greenhouse gases—in fact if the cement industry were a country, it would be the third largest emitter in the world. Alternatives to the current, environmentally harmful cement production process are not available essentially because the gaps in fundamental understanding hamper the development of smarter and more sustainable solutions. The ultimate challenge is to link the chemical composition of cement grains to the nanoscale physics of the cohesive forces that emerge when mixing cement with water. Cement nanoscale cohesion originates from the electrostatics of ions accumulated in a water-based solution between like-charged surfaces but it is not captured by existing theories because of the nature of the ions involved and the high surface charges. Surprisingly enough, this is also the case for unexplained cohesion in a range of colloidal and biological matter. About one century after the early studies of cement hydration, we have quantitatively solved this notoriously hard problem and discovered how cement cohesion develops during hydration. I will discuss how 3D numerical simulations that feature a simple but molecular description of ions and water, together with an analytical theory that goes beyond the traditional continuum approximations, helped us demonstrate that the optimized interlocking of ion-water structures determine the net cohesive forces and their evolution. These findings open the path to scientifically grounded strategies of material design for cements and have implications for a much wider range of materials and systems where ionic water-based solutions feature both strong Coulombic and confinement effects, ranging from biological membranes to soils. Construction materials are central to our society and to our life as humans on this planet, but usually far removed from fundamental science. We can now start to understand how cement physical-chemistry determines performance, durability and sustainability.