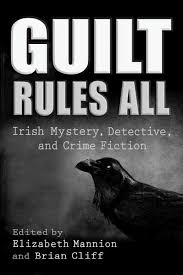 Irish crime fiction, long present on international bestseller lists, has been knocking on the door of the academy for a decade. With a wide range of scholars addressing some of the most essential Irish detective writing, Guilt Rules All confirms that this genre has arrived. The essays collected here connect their immediate subjects—contemporary Irish crime writers—to Irish culture, literature, and history. Anchored in both canonical and emerging themes, this collection draws on established Irish studies discussions while emphasizing what is new and distinct about Irish crime fiction. Guilt Rules All considers best-sellers like Adrian McKinty and Liz Nugent, as well as other significant writers whose work may fall outside of traditional notions of Irish literature or crime fiction. The essays consider a range of themes—among them globalization, women and violence, and the Troubles—across settings and time frames, allowing readers to trace the patterns that play a meaningful role in this developing genre. Beth and Brian will be in conversation with NYU’s Professor John Waters to celebrate the launch of the book, recently nominated for a prestigious Edgar Award, and several of the contributors will also be participating.

Elizabeth Mannion’s research focuses on theatre and an interdisciplinary range of Irish studies, from revivalist drama to contemporary crime fiction. She is the co-editor, with Brian Cliff, of the Edgar Award-nominated Guilt Rules All: Irish Mystery, Detective, and Crime Fiction (2020); editor of The Contemporary Irish Detective Novel (2016); and the author of The Urban Plays of the Early Abbey Theatre (2014). Her research has appeared in numerous journals and anthologies, most recently Bernard Shaw and the Making of Modern Ireland (2020) and A History of Irish Working-Class Writing (2017). She teaches at Baruch College in New York and is currently working on her new book, which examines the theatre of Wallace Shawn.

Brian Cliff is a visiting research fellow in the School of English at Trinity College Dublin, where he was an assistant professor from 2007 to 2019. His recent publications include the Edgar Award-nominated Guilt Rules All: Irish Mystery, Detective, and Crime Fiction (2020), co-edited with Elizabeth Mannion; Irish Crime Fiction (2018); Synge and Edwardian Ireland (2012), co-edited with Nicholas Grene; and a reprint of Emma Donoghue’s Hood (2011), co-edited with Emilie Pine. He co-organized “Irish Crime Fiction: A Festival” in November 2013, and is currently working on a monograph about community and contemporary Irish writing.