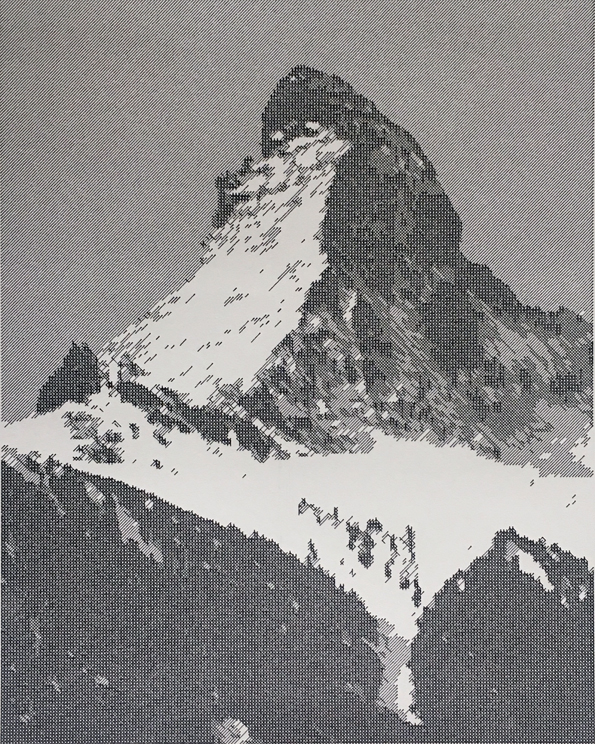 Deutsches Haus at NYU presents "Recent Drawings," an exhibition by the artist Hermann Zschiegner. The opening will take place on Friday, October 19, from 6 to 8 pm, and will feature an artist talk. The exhibition will remain on view through Friday, November 9.

To create the drawings in this show, Hermann Zschiegner wrote a javascript program that translates pixel values of an image into lines in four directions (horizontal, vertical, bottom-left/top-right, top-left/bottom-right). By overlapping these lines, various shades of grey are created, thus translating the bitmap image into a line drawing that he prints out using a pen-plotter. The drawing process takes, depending on the complexity of the image, 3 to 4 hours. Starting point for the drawings was based on Hermann Zschiegner’s love and interest in mountains, as he grew up surrounded by the Austrian Alps, paying homage to some of his favorite mountains. Also in the show are early drawing experiments, exploring the textures of paint strokes.

Hermann Zschiegner studied architecture at the University of Innsbruck and Columbia University, New York, where he received his Masters and was awarded the Kinne Fellows Prize. He is the principal of 2n – a New York based data visualization design agency. His work at 2n has earned him numerous awards including three consecutive awards for Design Excellency from Communication Arts (2010, 2011 & 2012) as well as four Webby Award nominations.

In addition to his role as Creative Director at 2n, Hermann Zschiegner keeps an art practice focused on issues of appropriation and conceptual photography. He is a founding member of ABC, the Artists' Books Cooperative, an international network created by and for artists who make print-on-demand artists’ books.

His Levine & Walker installation was shown at the 2011 Rencontres d’Arles in the group show FROM HERE ON, (curated by Clément Chéroux, Joan Fontcuberta , Erik Kessels, Martin Parr, and Joachim Schmid) as well as at the FoMu in Antwerpen, the Centre d’Art Santa Mònica, Barcelona, and the Museum Brandhorst in Munich.

In 2012, his books were part of the ABC/POD show at Printed Matter, New York, and the DIY: Photographers & Books exhibition at the Cleveland Museum of Art. Together with artist Jeff Brouws and Wendy Burton he worked on Various Small Books, a book about books about books made in homage or referencing the Artist Books of Ed Ruscha, published by MIT Press in the Spring of 2013. He was a co-curator for Ruscha & Co (Gagosian, New York), an exhibition of Ed Ruscha’s legendary artist books together with books and works of art by more than 100 contemporary artists, most of them featured in Various Small Books.