ALL GATES OPEN – A CELEBRATION OF CAN: rare film footage and discussion 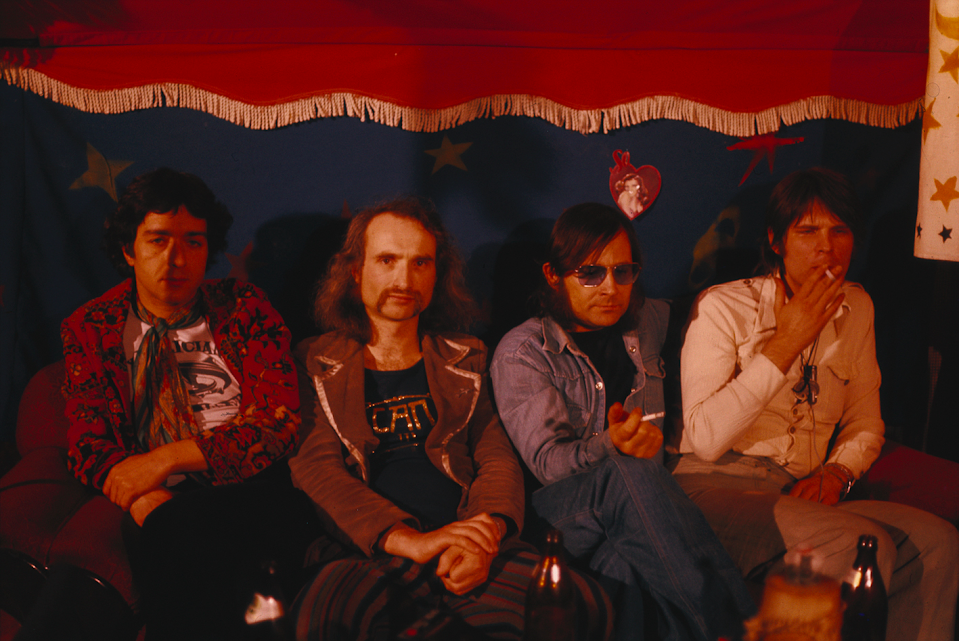 Deutsches Haus at NYU and the Colloquium for Unpopular Culture present "All Gates Open – A Celebration of CAN." Join Rob Young, author of the newly published biography All Gates Open (2018, Faber & Faber Social), and former New York Times music critic Ben Ratliff for a celebration of the band described as "lostspace travellers creating a new primitive society after fetching up on a far-flung planet." The event will be introduced by Sukhdev Sandhu, Associate Professor of English and Social and Cultural Analysis, and will include rare film footage of the band.

"Can have some kind of aura, a mystique about being Scanners Of The Skies, an advance guard of a new long-haired breed of Nietzchean super-heroes playing bass by thought-wave control" (Vivien Goldman)

Few bands are as enduringly revered as the German collective Can. Formed by Irmin Schmidt, Holger Czukay, Jaki Liebezeit and Michael Karoli in Cologne in the late 1960s, they channelled the artistic and social ferment of the period - Fluxus, Artaud, Stockhausen, Jimi Hendrix, the Velvet Underground - to create a unique noise encompassing free jazz, rock 'n' roll, avant-garde composition, dub and proto ambience. In a period of incredible German music that UK journalists dubbed 'krautrock' and others called 'kosmische' - Kraftwerk, Neu!, Faust, Cluster - they went both out 'out there' and 'in there', giving "permission for Germanic music to embrace the machine, to thieve the Promethean fire of technology and make it human. To put forward a distinctive German musical sensibility without shame, unhindered by the calamities of the past." Their admirers included not only Karl-Heinz Stockhausen ("Society dearly needs birds like these," he wrote), but Brian Eno, Talking Heads, John Lydon, Joy Division, Mark E. Smith, Sonic Youth, Tortoise, Stereolab, LCD Soundsystem and Radiohead.

Rob Young is a Contributing Editor of The Wire and writes for The Guardian, Frieze and Artforum. His books include the official biography of Can, All Gates Open (2018), Electric Eden: Unearthing Britain's Visionary Music (2010), Rough Trade (2006), and Warp (2005). He also edited Undercurrents: The Hidden Wiring of Modern Music (2002) and No Regrets: Writings on Scott Walker (2012). Based in Oslo, he is currently writing an occult history of British television.

Ben Ratliff is a writer whose books include Every Song Ever (2016) and Coltrane: The Story of a Sound (2007). He was a music critic at the New York Times for twenty years and has taught at NYU Gallatin since 2015.

S.S. Sandhu is Director of the Colloquium for Unpopular Culture at New York University. His books include Other Musics (2016). His writings have appeared in publications such as the London Review of Books, Suddeutsche Zeitung, and Du.

"All Gates Open - A Celebration of CAN" is a DAAD-supported event.