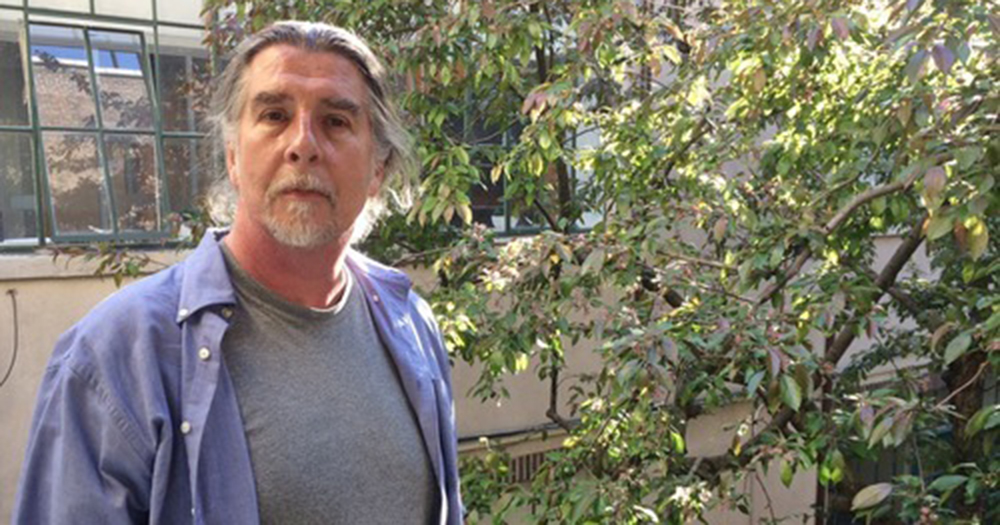 1. How did you come to Deutsches Haus? When did you have the idea of organizing a German-language book club?

I first came to Deutsches Haus in the fall of 1999. After spending some time in Germany and Austria, I was painfully aware that my college German had not adequately prepared me for everyday life kinds of things like buying food or understanding answers when I asked for directions. Feeling a need to improve my skills, I went to Deutsches Haus, took the placement test, and started at a relatively fundamental level. I have been coming back ever since.

The idea of forming a German-language book club was not mine. A former director of the Language Program, Kathrin Jonas, came up with the idea after some advanced students complained when no higher-level courses were offered for the summer semester. She asked me if I would be interested in organizing a literature group and I said I’d give it a try.

2. What is your personal background? How did you come to learn German?

I took German at Columbia University. I was studying Anthropology and creative writing, but I had to satisfy a language requirement. I had already taken French and Spanish in high school and was told I could continue with one of these languages, but I didn’t see any point in it because I had no idea how to speak or read either of them. I thought that since my Grandfather had come from Austria, I might try learning German. I had a really difficult time with it. Nevertheless, it made more sense to me than other foreign languages had, and I tried to keep up with it after leaving school.

3. Tell us a little bit about the book club. How often do you meet? What books do you discuss?

We meet on Fridays between 6:00 and 7:30 pm, but our schedule is always erratic because we have to plan around holidays and the other events that take place at Deutsches Haus on Friday evenings. For this reason, we may meet for several weeks in a row and then not get back together for two or three weeks. Members are given the exact dates before the beginning of each session. We try to schedule 5-7 meetings over the course of each 10-week semester at DH.

We tend to focus on the works of contemporary German writers. Most of the material we read falls into the category of so-called serious literature, but we do make forays into the realm of popular fiction from time to time.

4. And who are the members?

Originally, the Buchclub was solely for Deutsches Haus students. We didn’t have a fixed schedule and simply took a vote at the end of each meeting to decide when we’d like to do it again. It eventually became necessary to establish some guidelines and come up with a timetable. We also found it necessary to open the group up to people who were not Deutsches Haus students. At the moment, the group still has registered Deutsches Haus students and former students in its membership, but the majority is people from the outside who are nevertheless interested in reading and speaking German. Many of them are intermediate speakers, but some of the members are fluent, and we even have a few native speakers. This is very helpful, because we often confront “Redewendungen” (idioms) that don’t make any immediate sense to us. It’s great having people who can shed light on the meanings.

The group seems to be evenly divided between men and women, and most of the participants are middle aged. We do have a few younger members and would like to attract more.

5. How are the books chosen?

In the beginning, Kathrin Jonas chose the books for us. This system was quickly replaced by a dysfunctional democracy. We spent more time debating which books we should read than we did reading. I finally seized the initiative and made it known that I was going to choose the books. There was some resistance to this idea, but now things run smoothly. Most of my choices have gone over well. Not everybody likes every book, but discussions go better when members have differing opinions, and everybody is welcome to express their dislike for a book so long as they can explain why.

6. How do the meetings work?

Participants read a predetermined number of pages at home and then we talk about it when we meet. Members are asked to save noteworthy passages and to read them aloud during the meeting. I encourage this because I want people to actually feel the language in their mouths and throats, and calling attention to particular extracts from the text stimulates discussion.

7. What was your favorite story or book to speak about in the book club and why?

My primary functions in the Buchclub are to choose the book, promote registration, and to act as a moderator during the meetings themselves. I sometimes have to pose a lot of questions to get the conversation moving, but my goal is to hold meetings where I don’t have to say anything. When the participants stop trying to talk to me, and start talking with each other, I know things are going well.

Not surprisingly, the books that everybody enjoys are the ones that inspire the liveliest discussions. Das Parfum by Patrick Süskind may have been the greatest success in this sense. This is the story of an 18th Century serial killer, but it has less to do with the various murders than it does with the main character’s unbelievably acute sense of smell and how it affects his life. Although the book is not regarded as a great work of literature, it is entertaining, thought provoking, and the language is interesting. All the participants were more than eager to discuss it, and I barely had to say anything.

8. What are you reading right now? Do you have any great recommendations for contemporary German authors?

We are presently reading Alice, a collection of short stories by Judith Hermann. She is not a very prolific writer, but I have thoroughly enjoyed everything she has written, and would recommend her to anyone who is interested in reading short German fiction. In a similar vein, I would recommend anything by Jenny Erpenbeck. She is my favorite writer at the moment.

I don’t know of any better place to learn German. Everything I know about the language stems from what I learned here.

Deutsches Haus also has a wonderful cultural program that serves as a platform for cross-pollination between the German-speaking world and America. Throughout the year, there are any number of readings, lectures, art exhibits, and film screenings that are open to the public. These events are sometimes held in German and other times in English. Four German-language authors are invited to Deutsches Haus as writers-in-residence, and they not only give public readings, but also visit the “Meet the Author” course during their stay.

10. How long have you lived in New York? What’s your favorite spot in this city?

I have lived here most of my life. I was born in a small town in New Hampshire, but my parents moved to Manhattan when I was a small child. As for a favorite spot, I am very fond of the Greenway along the Hudson River and have spent a lot of time riding my bike there over the past few years. The scenery overlooking the water is beautiful and one can ride or walk from one end of Manhattan to the other without having to contend with automobile traffic and noise. It is in my opinion a “must see” part of New York City. But if I moved somewhere else, the one place I’d really miss is Deutsches Haus.