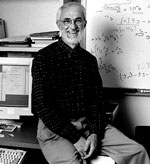 Generally, I am interested in the biophysical mechanisms and theoretical foundations of dynamic neural computation. With a background in engineering (BS: Univ of Florida, 1967) and applied mathematics (PhD: Courant Institute, NYU, 1973) I use mathematical models to understand how neurons and neural circuits generate and communicate with electrical and chemical signals for physiological function. I especially relish developing reduced, but biophysically-based, models that capture a neural system's essence. Before joining the CNS faculty (and jointly that of NYU's Courant Institute of Mathematical Sciences) in 1997, I was in the Mathematical Research Branch at the NIH for nearly 25 years.

My research in computational neuroscience began in 1969 while I worked for two years at the NIH with Wilfrid Rall to describe analytically the voltage spread throughout a neuron's (passive) dendrites. We also showed then that dendritic spines, based on their electrical properties, could be loci for synaptic plasticity. Recently, my collaborators and I have been studying the effects of active properties in dendritic membrane. In several case studies (of bursting in hippocampal neurons, of bistable firing in motoneurons, and of NMDA-induced bursting in dopamine neurons) we have learned that some neurons' rich repertoire of firing behavior depends critically upon the nonuniform spatial distribution of different voltage-gated ionic channel types across the soma and dendritic membrane. With a minimalist approach based on using only a few spatial/electrical compartments we could dissect and reveal the essential effects of cable properties and of spatially segregating some channel types.

Many of my modeling projects have dealt with oscillatory activity of neurons and some secretory cells. We have developed methods, from the mathematical theory of dynamical systems, to formulate and understand intrinsic mechanisms for repetitive firing and bursting oscillations of indivdual cells. Since 1992 we have also been investigating how intercellular coupling mechanisms in conjunction with intrinsic properties account for the experimentally observed collective rhythms of neurons in networks (thalamus, hippocampus, inferior olive). For example, in formulating and analyzing minimal biophysical models of sleep-spindle-like rhythms in thalamic networks we concluded that mutual inhibition can lead to in-phase synchrony when synaptic conductance decays slowly; although counterintuitive, this effect appears to be quite general.

Our on-going studies of neuronal oscillations include: effects of electrical and synaptic coupling and correlated input on synchrony in mutually inhibitory sub-populations; mechanisms for spontaneous rhythmogenesis in developing neural systems; interplay of inhibitory subtypes in gamma rhythmicity.

Recently, we have been studying perceptual dynamics - primarily, developing models for perceptual bistability and alternations for ambiguous stimuli in vision and audition. In conjunction with modeling we carry out psychophysical experiments in our lab in pursuit of understanding auditory streaming.

In several current projects we investigate the dynamics of auditory processing: the cellular and synaptic biophysical mechanisms for coincidence detection and precise temporal processing in brain stem neurons; adaptation mechanisms and dynamic plasticity in inferior colliculus and cortex.

Our research involves sustained and strong interactions with experimental groups here in the Center for Neural Science and elsewhere; frequently, members of my working group combine theoretical and experimental approaches.