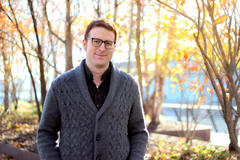 Associate Director of Hagop Kevorkian Center for Near Eastern Studies

James Ryan's work at the Kevorkian Center encompasses all of the Center's administrative responsibilities, including programming, grant writing and administration, K-12 outreach activities, budgetary management, and building supervision. He is a historian of the Ottoman Empire and the Republic of Turkey and holds a Ph.D. and an M.A. in History from the University of Pennsylvania and a Bachelor's degree in Near Eastern Languages and Civilizations from the University of Chicago. Dr. Ryan occasionally teaches graduate seminars on topics related to Ottoman and post-Ottoman history, and regularly advises M.A. theses. His scholarly work focuses on the histories of dissent, political culture, and ideology across the transition from the Ottoman Empire and its successor states. He is currently working on a book manuscript tentatively titled "The Other Republic: The Culture of Dissent under Turkey's One-Party State, 1919-1950" focused on the contributions of opposition figures to political and cultural life in the first thirty years of the Turkish Republic. He has published work in the Journal of the Ottoman and Turkish Studies Association, the Journal of Urban History, Mobility in History, the Middle East Journal, among others. His writing has also appeared in public forums such as Public Books, Al-Jazeera America, and Newlines Magazine. Prior to his graduate studies, he served on the staff of the Middle East Center at the University of Pennsylvania, where he coordinated outreach programming and academic events.