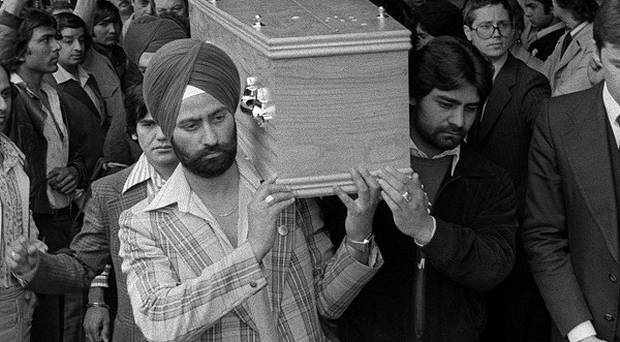 "Blair Peach was not an Englishman.

Him come from New Zealand.

Now they kill him and him dead and gone,

But his memory lingers on."

"On 28 April 1979 15,000 Asian people in Southall, West London marched in memory of Blair Peach. They stood with clenched fists over the police where he was murdered. And they chanted a single triumphant slogan: 'Blair Peach zindabad - long live Blair Peach.' It was perhaps the greatest demonstration of solidarity between people of different colours but with similar interests and similar purpose that the town had ever seen." (Paul Foot)

Blair Peach (1946-1979) was born in Napier, New Zealand, worked for a stint as a fireman, but was turned down for military training on account of his "unsuitable character". He moved to London's East End where he taught at a special needs school, became involved in anti-racist politics, and during a period of escalating xenophobia stoked by the fascistic National Front and the newly-elected Conservative Party leader Margaret Thatcher, devoted much of his time and energy to supporting the struggles of black and Asian Londoners.

On 23 April 1979, he was part of a demonstration in heavily Asian Southall, a neighbourhood which, especially since the fatal stabbing of 18-year-old Gurdip Singh Chaddar in Jun 1976, had been the target of increasingly violent attacks not only by National Front supporters but also by the local police. Nearly 3000 of the latter were deployed that day to ensure the fascists could hold a rally. 700 protestors were arrested, paramedics were denied proper access to tend to police-battered bystanders, the People Unite community centre run by Misty In Roots was raided and the band's manager Clarence Baker beaten into a coma from which he only emerged months later. The same evening six members of the Special Patrol Group, London's elite riot squad, were implicated in the death of Blair Peach who had been walking with other protestors along a Southall street. Their bosses claimed a leftwing fanatic struck Peach in order to create a leftwing martyr. Searches of SPG officers' lockers found crowbars, metal coshes, a whip, and knives.

To this day no officer has been charged with his death.

VIVIEN GOLDMAN is a writer, educator, broadcaster and musician. A Londoner who now lives in New York, her early 1980s post-punk music was anthologised on the 2016 LP Resolutionary and her Revenge of the She-Punks is published this May.

BHANU KAPIL, raised in Southall, teaches at Goddard College. Her books include The Vertical Interrogation of Strangers (2001), Schizophrene (2011), and Ban en Banlieue (2015).

CHRIS SEARLE is a British educator, poet, and anti-racist socialist who was fired by his East End school in the early 1970s for publishing a book of radical children's poetry. (This led to a successful 800-pupil strike.)

KEN WORPOLE left school at 16, worked at Hackney's radical Centerprise bookshop between 1973 and 1979, and is now a social historian many of whose books focus on architecture, landscape, and public instiutions.