Lauren K. Alleyne is the author of two collections of poetry, Difficult Fruit (Peepal Tree Press 2014), and Honeyfish (New Issues & Peepal Tree, 2019).  Her work has appeared in numerous publications including the New York Times, The Atlantic, Ms. Muse, Women’s Studies Quarterly, Interviewing the Caribbean, and the Crab Orchard Review. Recent honors for her work include a 2017 Philip Freund Alumni Prize for Excellence in Publishing (Cornell University), the 2016 Split This Rock Poetry Prize and a Picador Guest Professorship in Literature (University of Leipzig, Germany, 2015). She is currently the assistant director of the Furious Flower Poetry Center and an associate professor of English at James Madison University.

t’ai freedom ford is a New York City high school English teacher and Cave Canem Fellow. Her poetry, fiction, and essays have appeared in The African American Review, Apogee, Bomb Magazine, Calyx, Drunken Boat, Electric Literature, Gulf Coast, Kweli, Tin House, Obsidian, Poetry and others. Most recently she has won awards from the Community of Literary Magazines and Presses (CLMP) and is a 2019 Jerome Hill Artist Fellowship inaugural fellow. Winner of the 2015 To the Lighthouse Poetry Prize, her first poetry collection, how to get over (2017), is available from Red Hen Press.  Her second poetry collection, & more black (2019), is with Augury Books. t’ai lives and loves in Brooklyn where she is an editor at No, Dear Magazine.

Interdisciplinary artist avery r. young is also an award-winning teaching artist who has been an Arts and Public Life Artist-In-Residence at the University of Chicago. In the foreword of his most recent book neckbone: visual verses (Northwestern Uni. Press, 2019), Theaster Gates called him “one of our greatest living street poets...one of the most important thinkers on the Black experience.” Black Grooves referred to his most recent album tubman. (FPE Records, 2019) as “brilliant” and “supremely funky.” Young’s poems and essays have been published in Cecil McDonald's In The Company of Black, The BreakBeat Poets, The Golden Shovel Anthology: New Poems Honoring Gwendolyn Brooks, AIMPrint and other anthologies. His album booker t. soltreyne: a race rekkid engages matters of race, gender, and sexuality in America during the Obama Era. Young’s work in performance, visual text and sound design has been featured in several exhibitions and theatre festivals—notably The Hip Hop Theatre Festival, The Museum of Contemporary Art, and American Jazz Museum.   He is the featured vocalist on flutist Nicole Mitchell’s Mandorla Awakening (FPE Records) and is one of four directors of The Floating Museum, co-mentoring Rebirth Youth Poetry Ensemble and performing with his band, de deacon board. 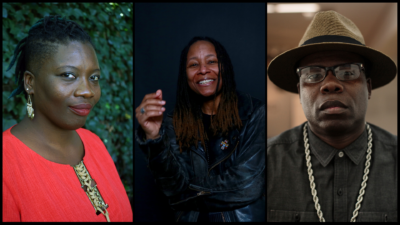