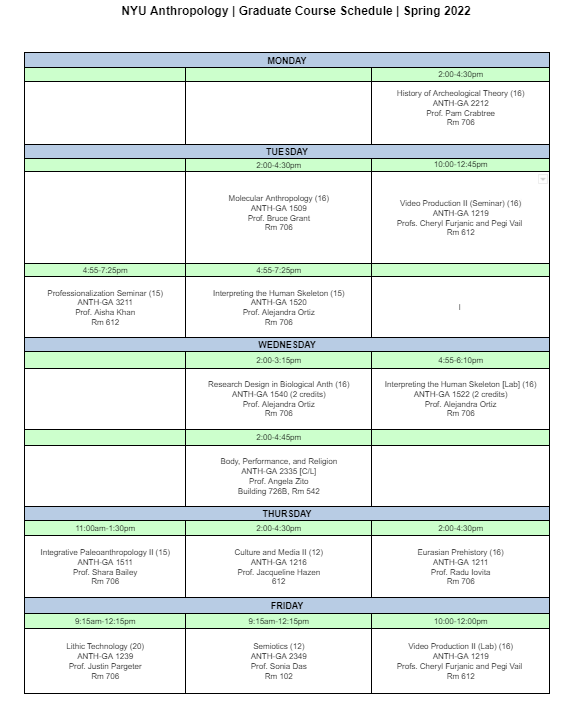 This seminar will provide an in-depth look at the Stone Age prehistory of Eurasia to the end of the last Ice Age (roughly 13 thousand years ago). Graduate students and advanced undergraduates will progress chronologically, beginning with the first hominins to come out of Africa, moving on to the world and lifeways of Homo erectus and the Neanderthals and Denisovans, followed by the second major dispersal out of Africa by the first modern humans, and ending with the Last Glacial Maximum and the warming period leading up to the Holocene. Students will be reading critically from primary sources and writing and presenting about the preserved material culture remains of different periods and their environmental and biological contexts.

In the last decade, a new field – the ethnography of media – has emerged as an exciting new arena of research. While claims about media in people's lives are made on a daily basis, surprisingly little research has actually attempted to look at how media is part of the naturally occurring lived realities of people?s lives. In the last decade, anthropologists and media scholars interested in film, television, and video have been turning their attention increasingly beyond the text and the empiricist notions of audiences (stereotypically associated with the ethnography of media), to consider, ethnographically, the complex social worlds in which media is produced, circulated, and consumed, at home and elsewhere. This work theorizes media studies from the point of view of cross-cultural ethnographic realities and anthropology from the perspective of new spaces of communication focusing on the social, economic, and political life of media and how it makes a difference in the daily lives of people as a practice, whether in production, reception, or circulation.

This is the second part of a year-long course in ethnographic video production. Students will continue to learn advanced production techniques and examine narrative structure, storytelling strategies, and poetic representational techniques. Relating theory to practice, students will explore the dilemmas and possibilities video production holds for representing social experience. The course culminates in a public screening of students’ independent video projects. Seminar meetings will be run as Production Meetings. Students will complete in-class exercises to help them focus their projects, develop a cohesive narrative, learn script writing, brainstorm scene ideas, overcome narrative challenges, and discover their unique aesthetic. Each week students will present new footage and scenes and explain their work in terms of their goals for the final project. During lab time, students will review production and post-production techniques. We will also screen student footage along with model films. Individual meetings will be held during seminar and lab time to offer individualized attention to each student.

This course is intended to provide an in-depth introduction to contemporary methods in the analysis of stone tools. The readings and discussion will revolve around five themes that concern lithic artifacts in general, namely Morphology, Function, Style, Technology, and Taphonomy.

Molecular anthropologists use biochemical technologies to address anthropological topics such as the phylogenetic relationships among humans and African apes, models of modern human origins, and the identity of archaic humans like the Denisovans. This course intends to provide students with both a background in elementary genetics and also a review of some of the major research in molecular anthropology and primatology. The first section will begin with a brief overview of genetics, inheritance, population genetics, and major methodological advances of genomics. Subsequently, we will discuss major findings in human and primate genetics, including work on phylogeny, population genetics, molecular adaptation, and species’ history in detail. The main goal is to provide students with a background sufficient for i) an understanding of the field of molecular anthropology, ii) teaching it and related topics to undergraduates, and iii) future reading and research in genetics.

This course provides a detailed overview of the later stages of human evolution from the late Pliocene to the
latest Pleistocene,focusing on the fossil and archaeological records. It emphasizes the anatomical, phylogenetic,
behavioral and cultural aspects of Plio-Pleistocene hominins in Africa, their dispersal into the rest of the Old
World, and the origins of modern humans and their contemporaries worldwide. Special topics include: The
ecological, behavioral, and morphological factors behind the origin and initial dispersal of Homo from Africa, a
critical review of the taxonomic and biogeographic arguments regarding Homo erectus and its contemporaries,
the reconstruction of life history patterns in genus Homo, the nature of the relationship between Neandertals,
Denisovans and latest H. erectus and the origin of modern humans. Students will supplement their reading of
the primary literature with the study of comparative skeletal materials and casts of early hominins in lab
sessions. Open to advanced undergraduate majors with instructor approval.

Provides an intensive introduction to the methods and techniques used to reconstruct soft tissue anatomy and behavior from the human skeleton. Focuses on techniques and applications to all areas of skeletal biology, including bioarchaeology, paleoanthropology, forensics, and anthropology. Addresses bone biology, developmental processes, and soft tissue anatomy. Students learn (1) fundamentals of aging, sexing, and individuating human skeletal remains; (2) how to estimate stature, weight, and, to the extent possible, geographic ancestry; and (3) how to recognize and evaluate pre- and postmortem modification, including evidence of disease and activity.

Research Design in Biological Anthropology is an intense writing seminar with the goal of teaching the fundamentals required to develop and begin a scientific research project in biological anthropology. The weekly seminar will provide overviews of the structure of a research project, how to identify research problems, how to construct methods of addressing these problems, how to interpret the resulting data and how to present these data. This is not a course about data collection or analysis. This is a course about how to design, pitch (as to a grant agency or your supervisor) and then implement a strong research project in biological anthropology. The course will be hands-on, requiring students to write a scientific paper, peer-review the work of others in the course, and extensively revise their own work.

This course will review the development of archaeological theory from the beginnings of antiquarianism in the 16th, 17th, and 18th centuries to the emergence of the post-processual movements beginning in the 1980s and 1990s. The topics to be covered include the development of archaeology as a scientific/humanistic discipline, diffusionism and Childe’s modified diffusionism, the beginnings of modern archaeological theory, Lewis Binford and the processual movement, and the diversity of post-processual approaches.

Beyond text-centered dogma, philosophy, and scriptures we find lived religion in everyday life and practice:  At the center of this course will be bodies in the materiality of their corporeal performances and physical sensations, amid the things they touch and use in their religious practices: “Tangible Religion” if you will.  The course will serve as an introduction to various aspects of post-structuralist theory, covering embodiment, subjectivity, agency, affect theory and the materialist turn.  We will look at the body in various situations—gendered, sexualized, covered, naked, suffering, disabled, altered, missing, ecstatic, monstrous—and interrogate notions of representations and ideals: from the religious ban on representing the human body to divine anthropomorphism. A variety of religious archives will be explored.  The course will be team-taught by Angela Zito and Bill McGrath.

This course explores how theories of sign relations, also known as “semiotics,” elucidate practices and processes of representation, interpretation, and classification pertaining to the construction of everyday social life and cultural forms.  By closely reading structuralist and post-structuralist writings in philosophy, anthropology, literature, history, and linguistics, we will use these texts to deepen our ethnographic inquiries into contemporary topics related to notions of agency, subjectivity, ontology, ideology, politics, capitalism, value, and modernity. We will also explore the diversity and range of material signs, both linguistic and non-linguistic, to better understand the potential of these signs for constituting sociocultural worlds of diverse scales and imaginaries.

Addresses the central skills and resources needed for a professional career in anthropology including: how to submit a research proposal to the human subjects review board; how to write grant applications; how to join/participate in professional associations; and how to be a successful teaching assistant. Students also present recent fieldwork experiences and rehearse forthcoming AAA papers. Three sessions provide training toward certification in the Responsible Conduct of Research” (RCR), now required by some federal granting agencies; students also enroll in the two RCR sessions offered each semester by NYU, fulfilling all five required sessions. 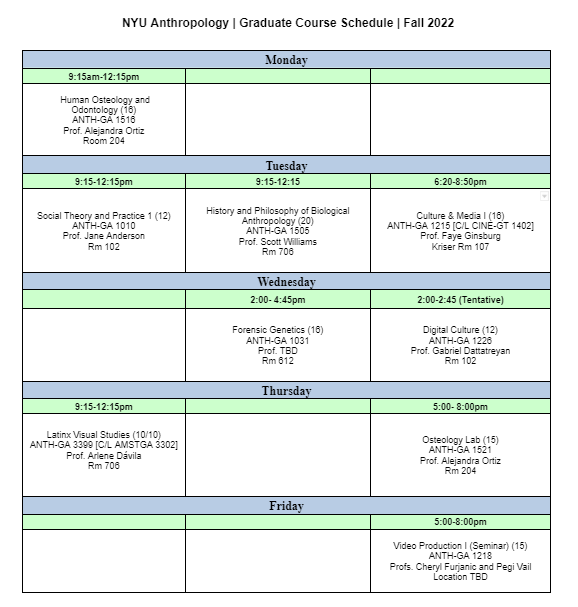 This course offers a critical revision of the history of the genre of ethnographic film, the central debates it has engaged around cross-cultural representation, and the theoretical and cinematic responses to questions of the screen representation of culture, from the early romantic constructions of Robert Flaherty to current work in film, television, and video on the part of indigenous people throughout the world. Ethnographic film has a peculiar and highly contested status within anthropology, cinema studies, and documentary practice. This seminar situates ethnographic film within the wider project of the representation of cultural lives, and especially of natives. Starting with what are regarded as the first examples of the genre, the course examines how these emerged in a particular intellectual context and political economy. It then considers the key works that have defined the genre, and the epistemological and formal innovations associated with them, addressing questions concerning social theory, documentary, as well as the institutional structures through which they are funded, distributed, and seen by various audiences. Throughout, the course keeps in mind the properties of film as a signifying practice, its status as a form of anthropological knowledge, and the ethical and political concerns raised by cross-cultural representation.

This course explores how modern molecular genetics techniques and data are deployed by forensic science.  DNA data, especially, have both in reality and in the cultural imagination become a primary tool of forensic investigation.  We will look at how crime scenes are investigated, what types of data are collected, how molecular genetic information is turned from a crime scene sample to a probabilistic match to a suspect.  We will review numerous case studies that illustrate how genetic data can be used (or misused) in criminal cases, mass disasters, and the search for missing persons

Yearlong seminar in ethnographic documentary video production using state-of-the-art digital video equipment for students in the Program in Culture and Media. The first portion of the course is dedicated to instruction, exercises, and reading familiarizing students with fundamentals of video production and their application to a broad conception of ethnographic and documentary approaches. Assignments undertaken in the fall raise representational, methodological, and ethical issues in approaching and working through an ethnographic and documentary project. Students develop a topic and field site for their project early in the fall term, begin their shooting, and complete a short (5- to 10-minute) edited tape by the end of the semester. This work should demonstrate competence in shooting and editing using digital camera/audio and Final Cut Pro nonlinear editing systems. Students devote the spring semester to intensive work on the project, continuing to shoot and edit, presenting work to the class, and completing their (approximately 20-minute) ethnographic documentaries. Student work is presented and critiqued during class sessions, and attendance and participation in group critiques and lab sessions is mandatory. Students should come into the class with project ideas already well-developed. Students who have not completed the work assigned in the first semester are not allowed to register for the second semester. There is no lab fee, but students are expected to provide their own videotapes. In addition to class time, there are regular technical lab sessions on the use of equipment.

An in-depth survey of the various ways in which biological anthropologists employ human osteology, the study of bones and the skeleton. In addition to presenting a detailed review of the anatomy of the human skeleton and its associated musculature, examines a series of thematic issues and topics that emphasize the multidisciplinary nature of the study of skeletal morphology. Topics include bone biology and development, comparative osteology, biomechanics, bioarchaeology, forensic anthropology, and taphonomy. 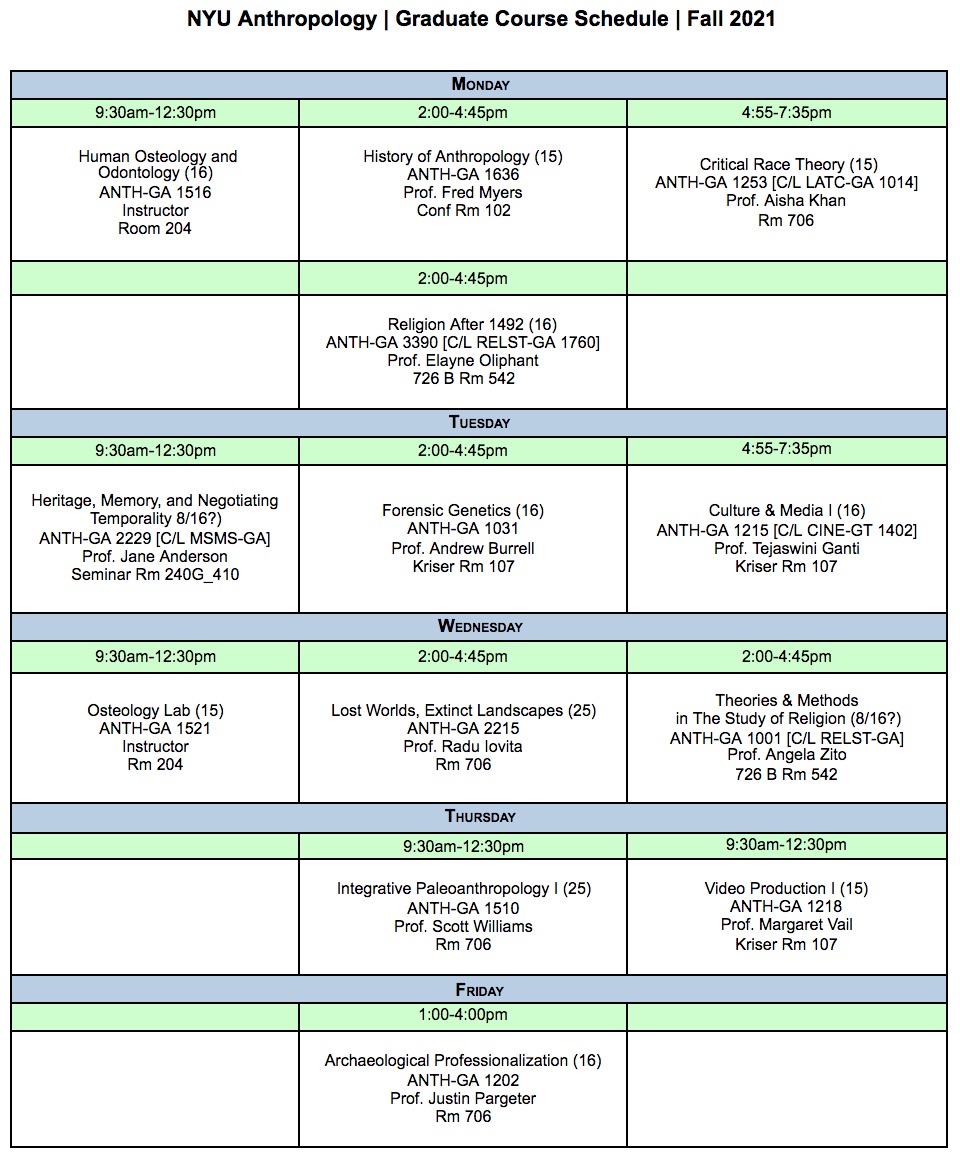 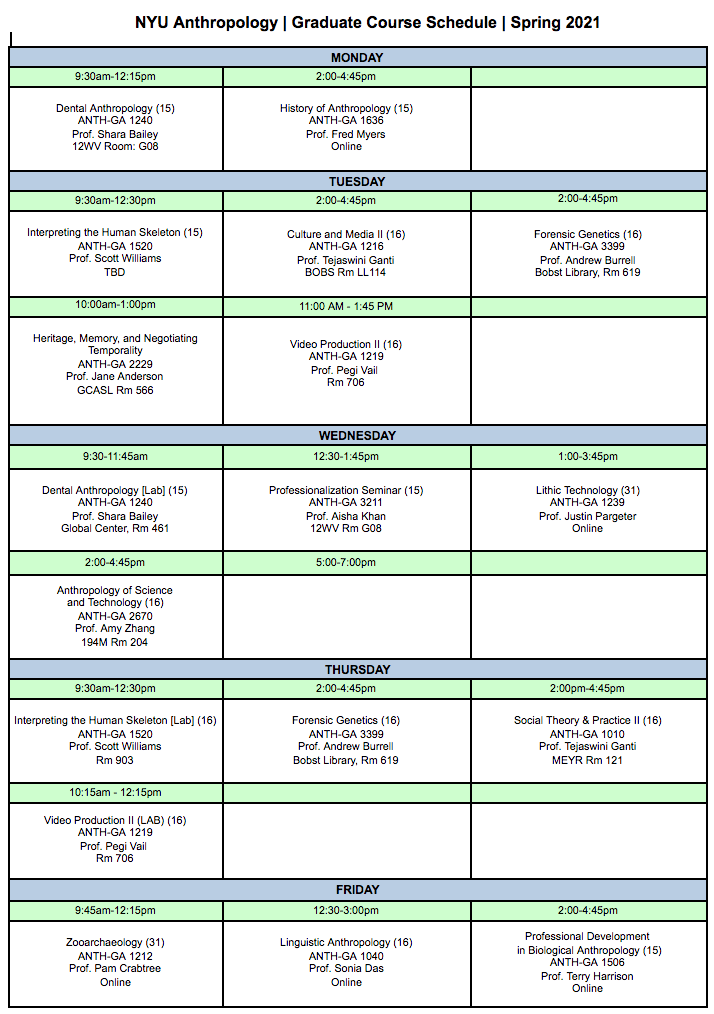 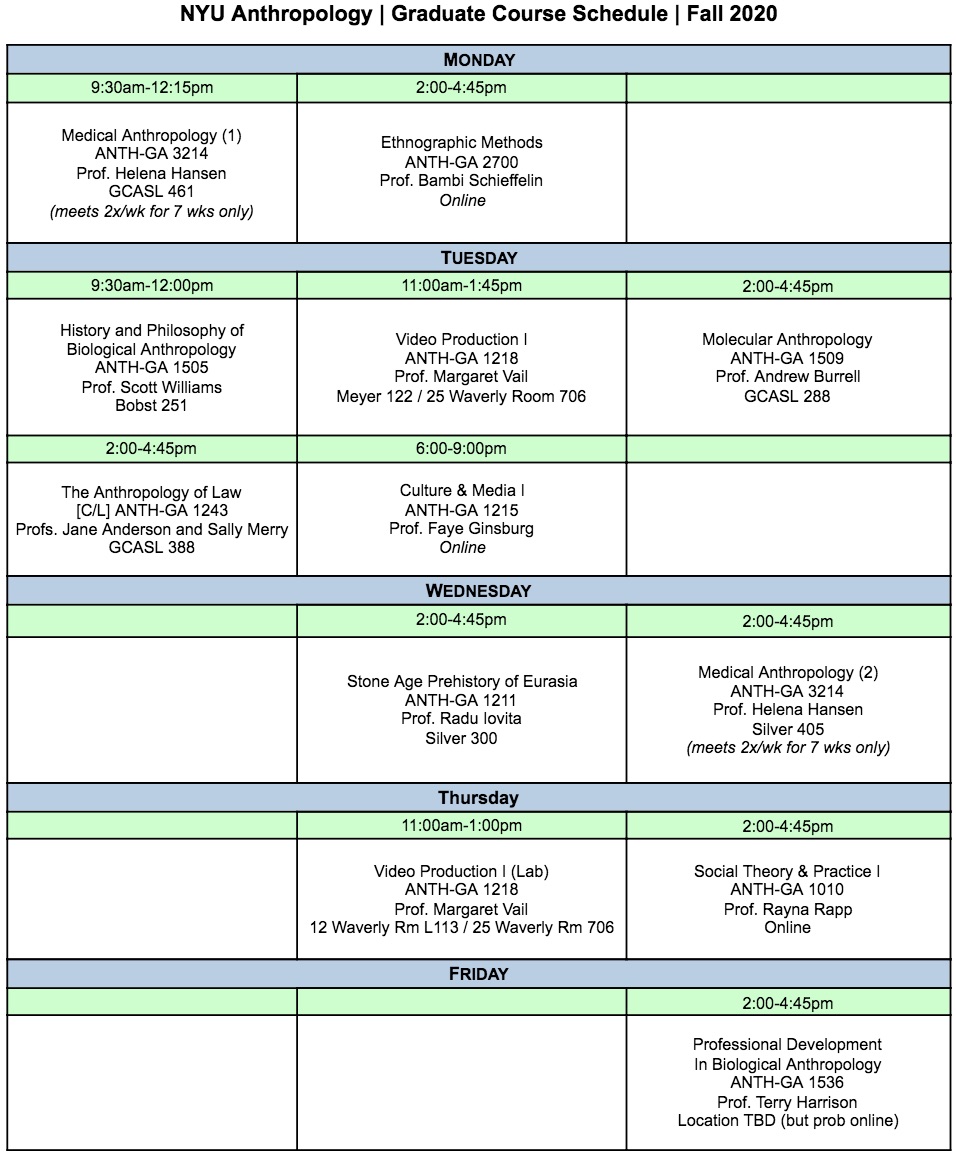 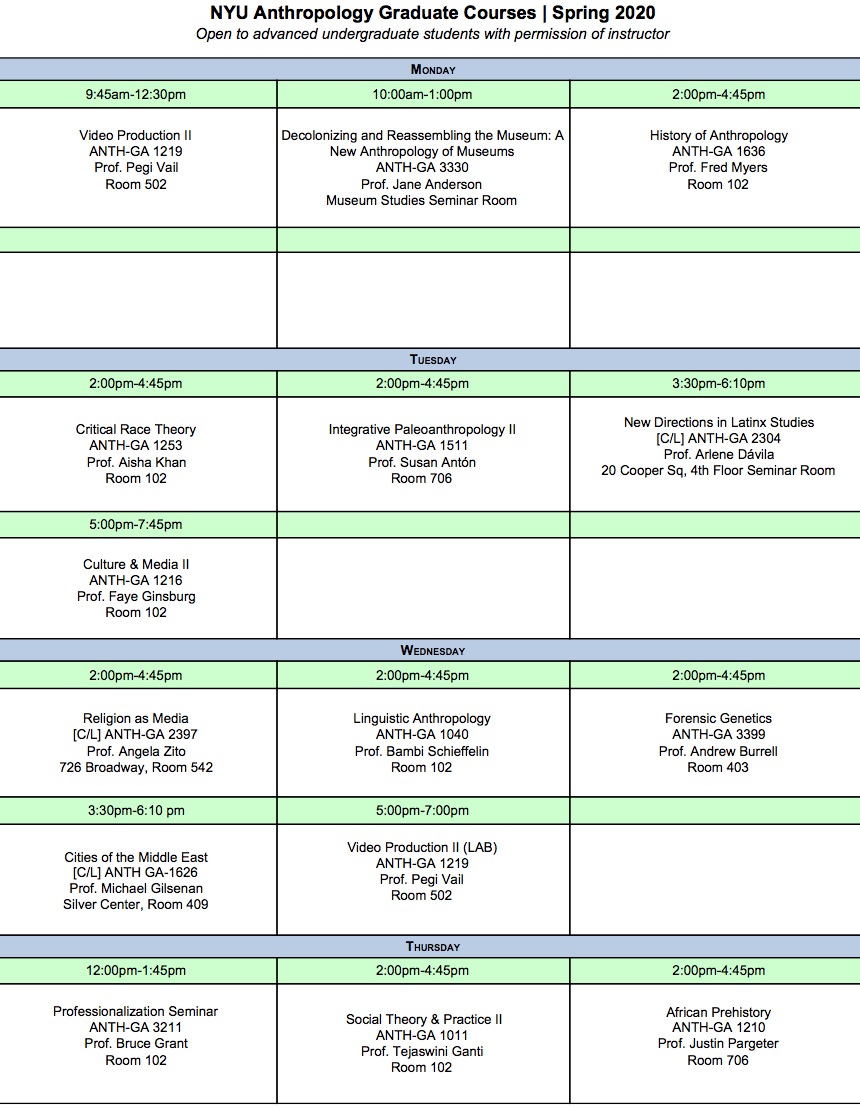 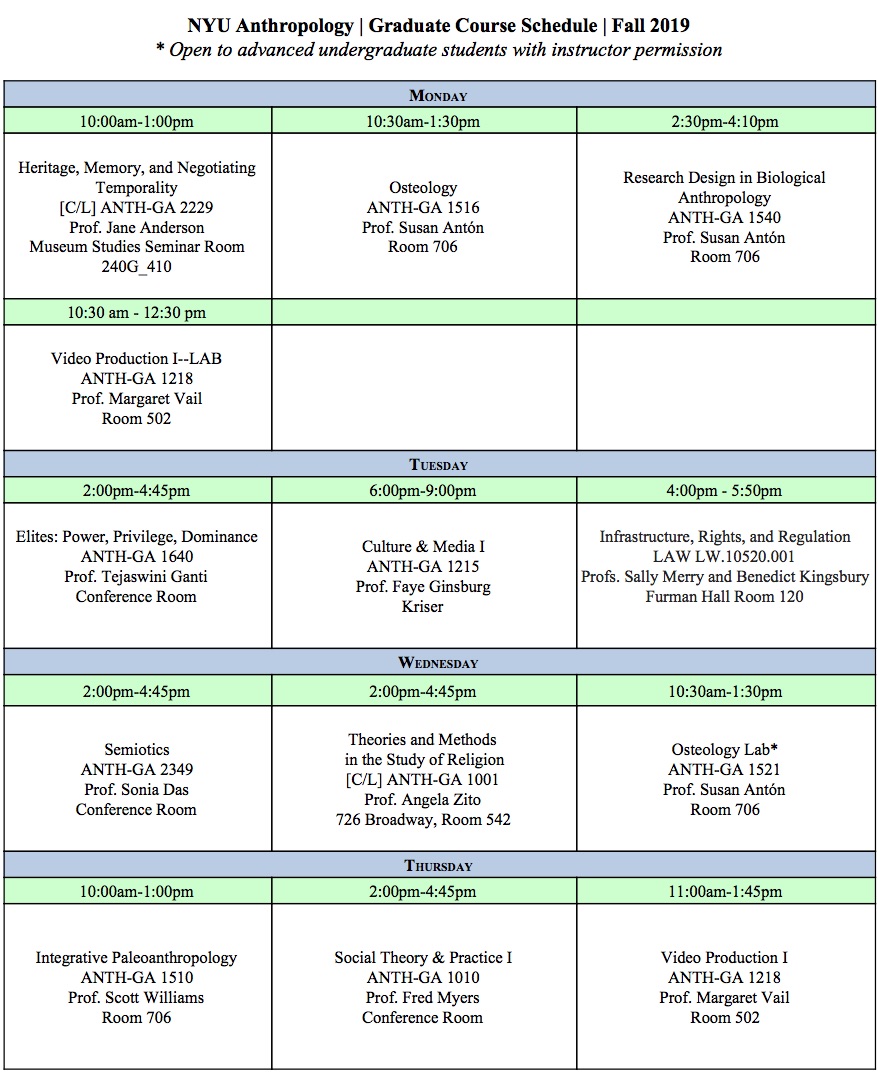 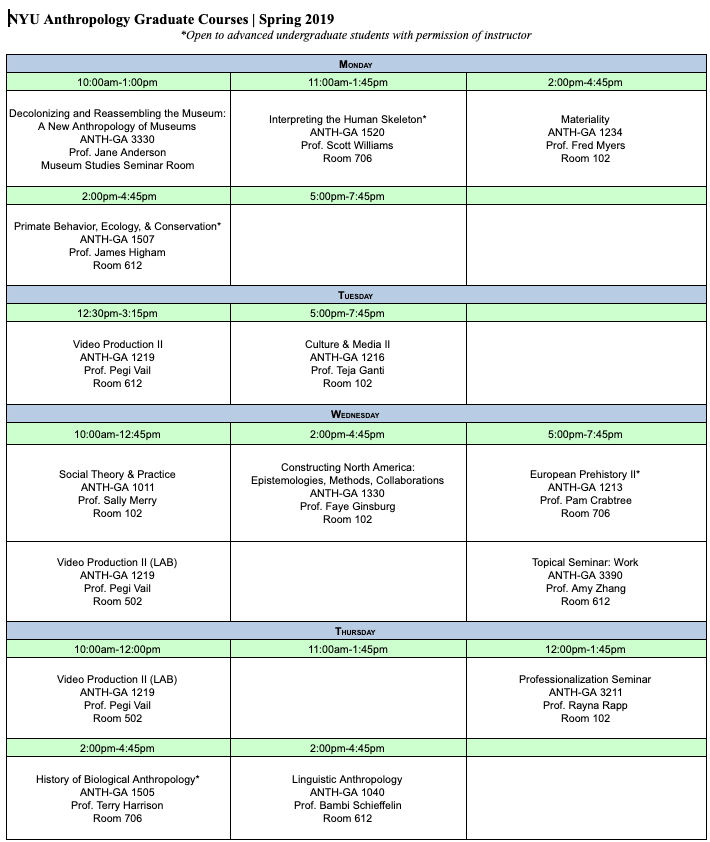 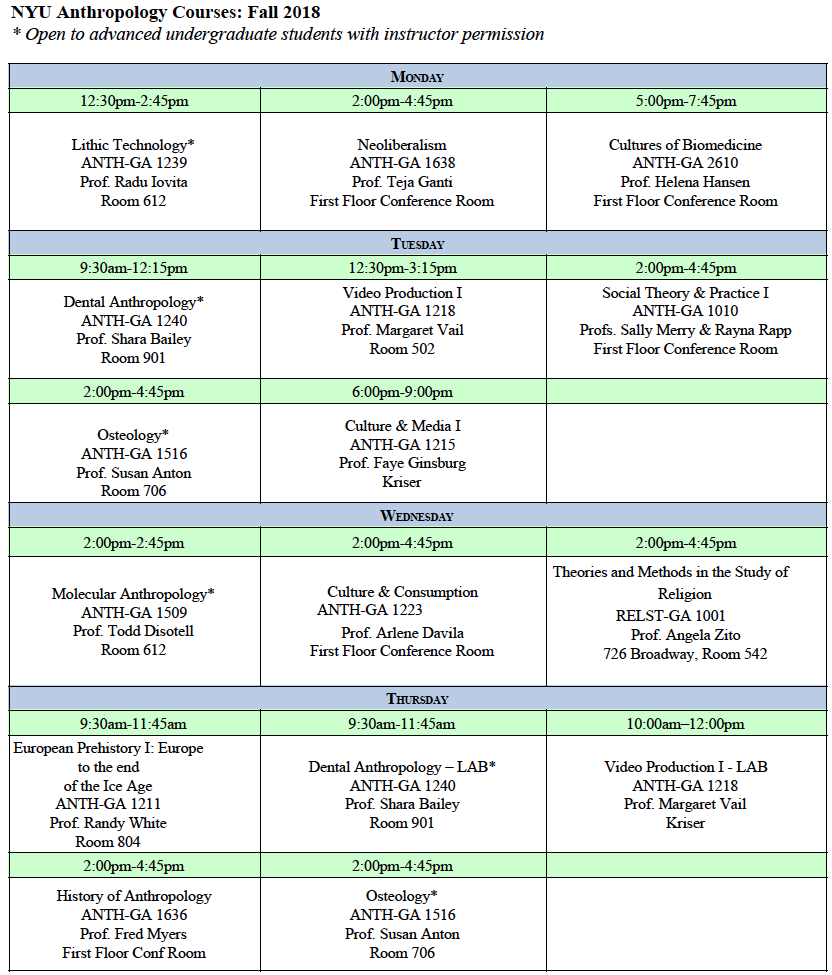 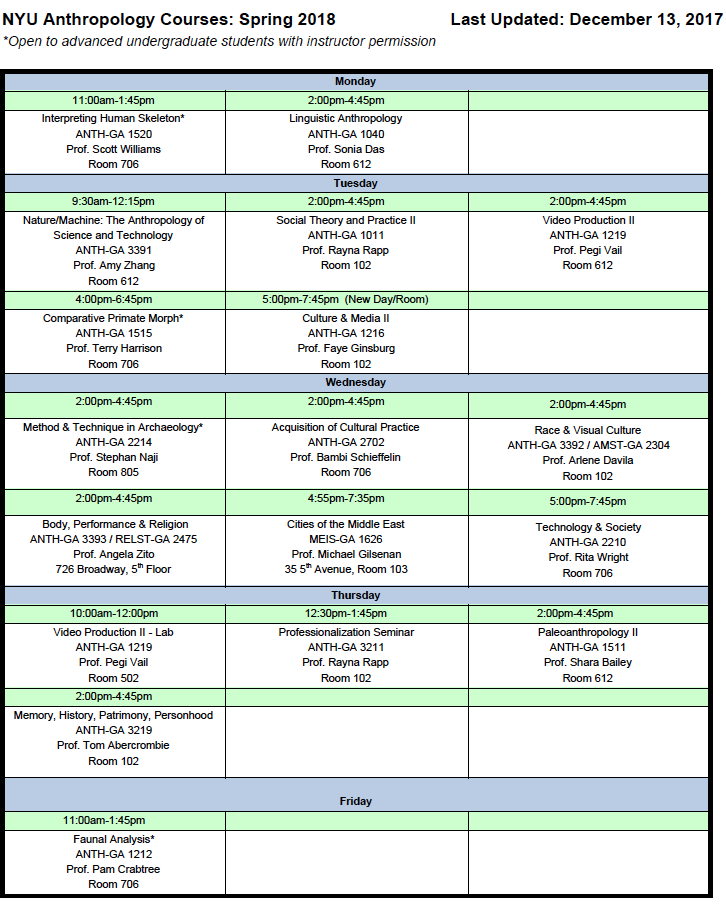 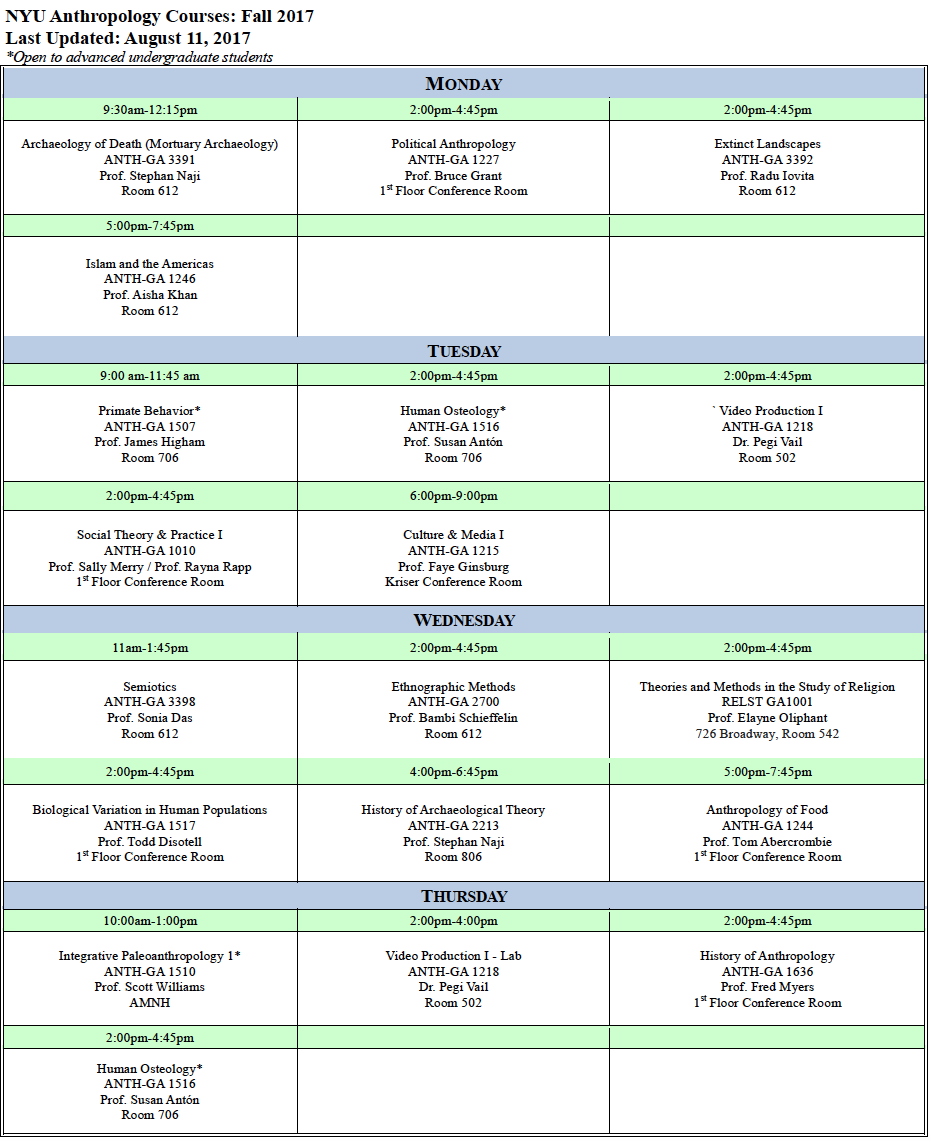 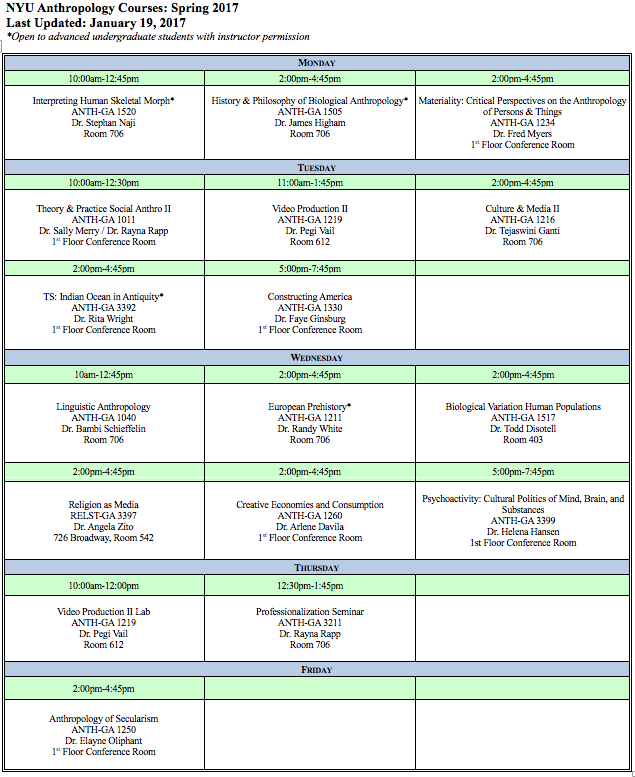 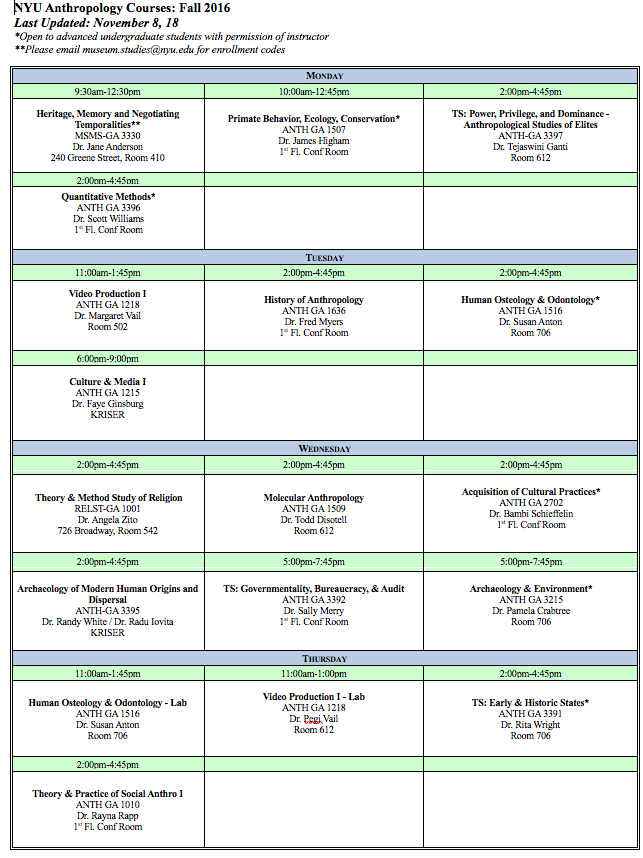 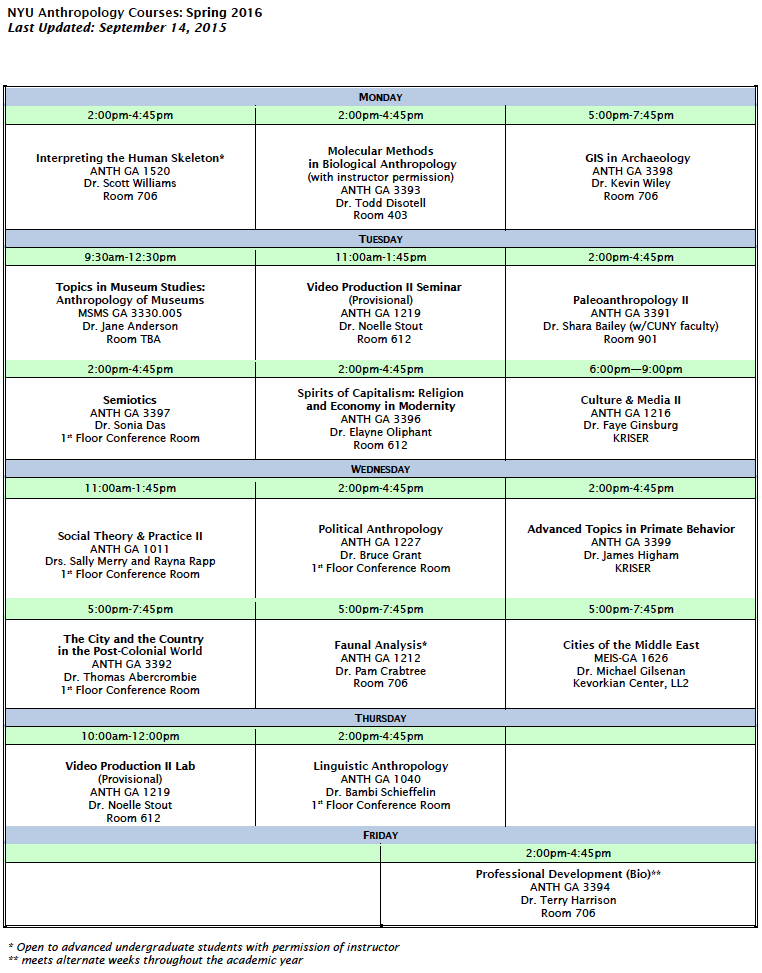 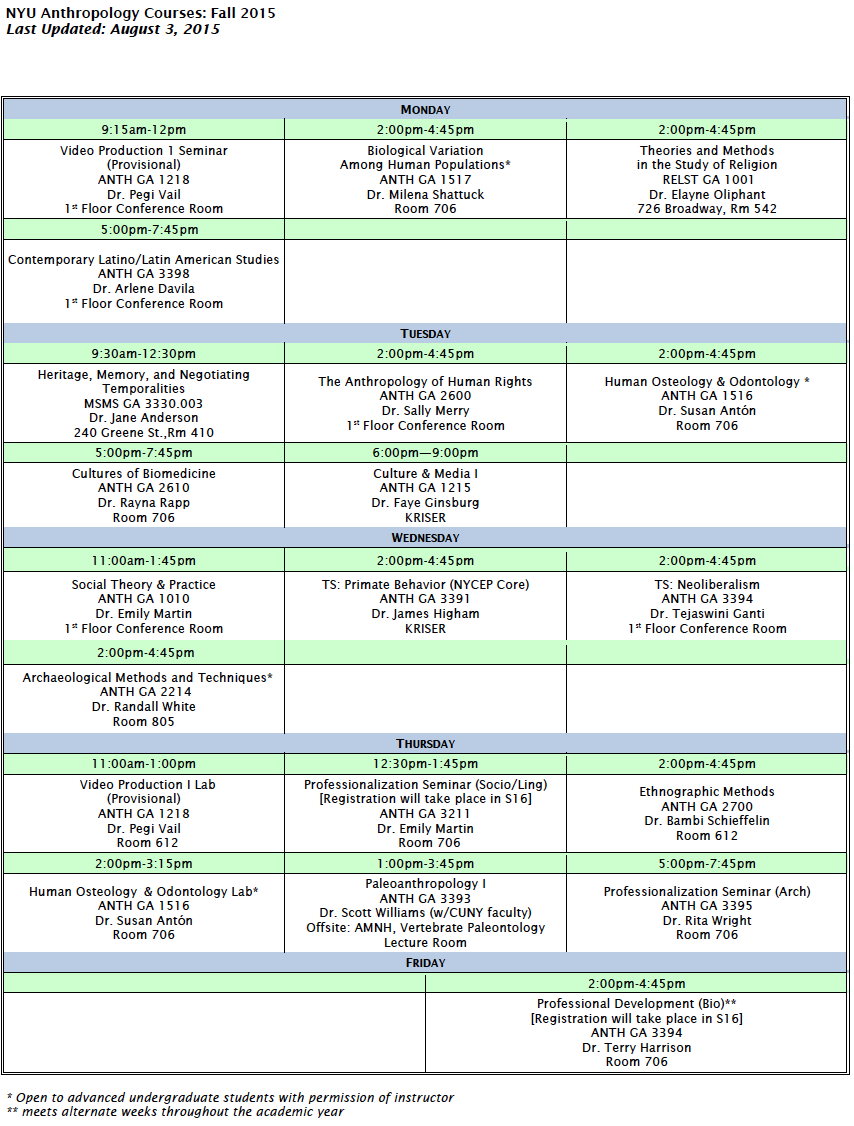 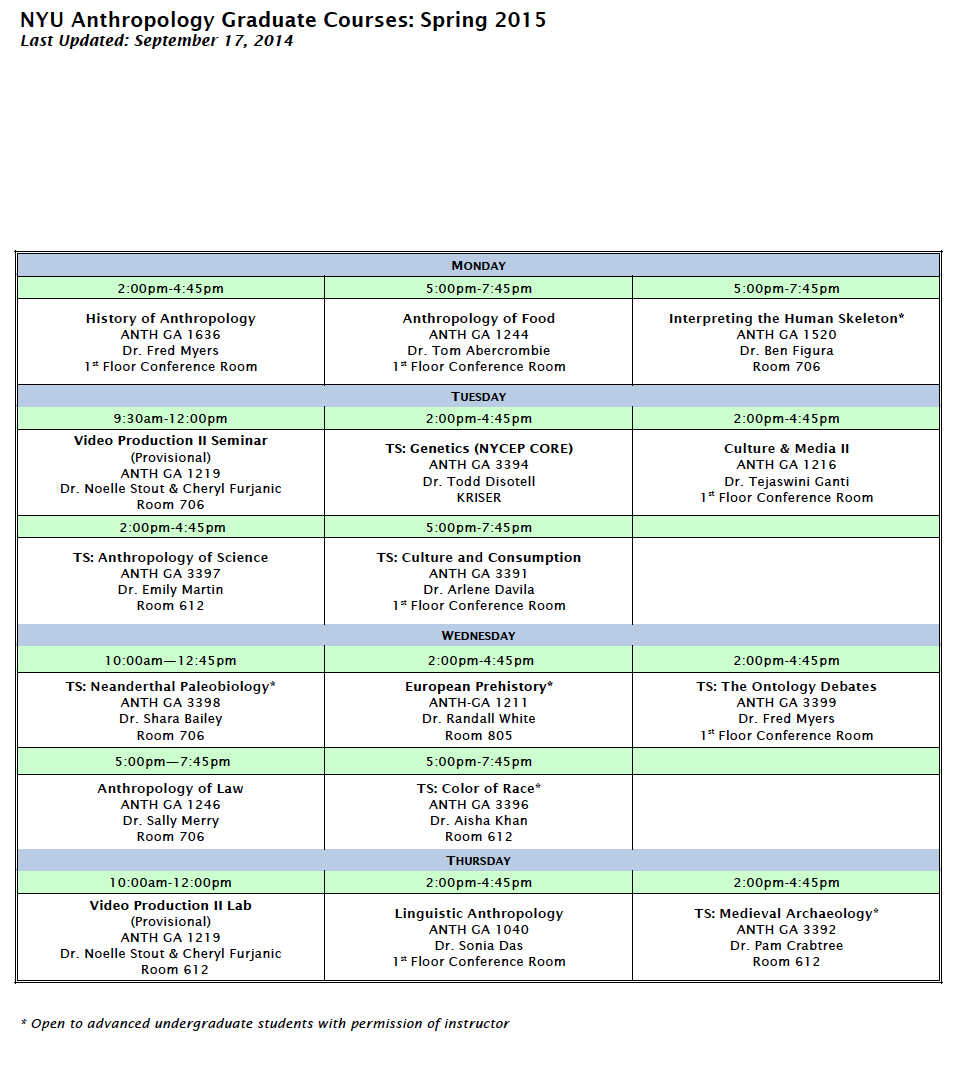 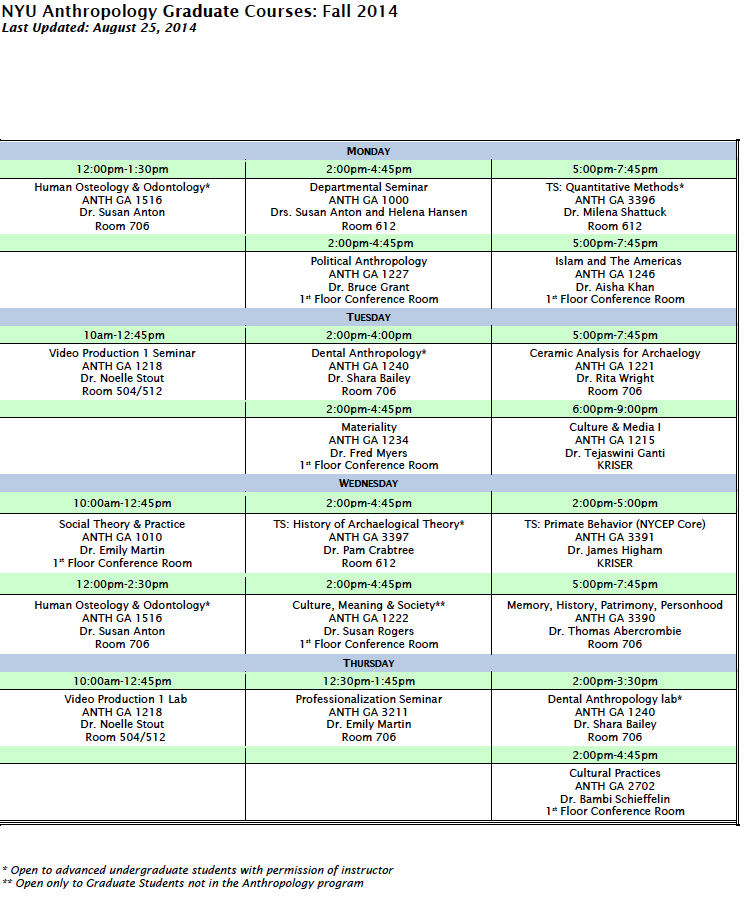 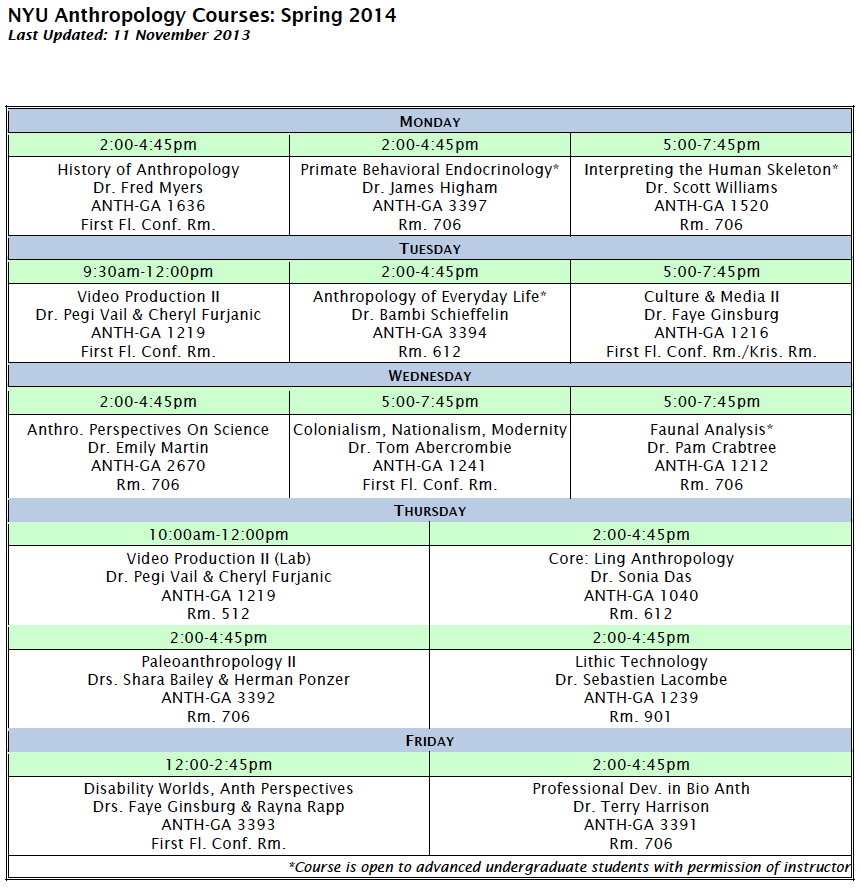 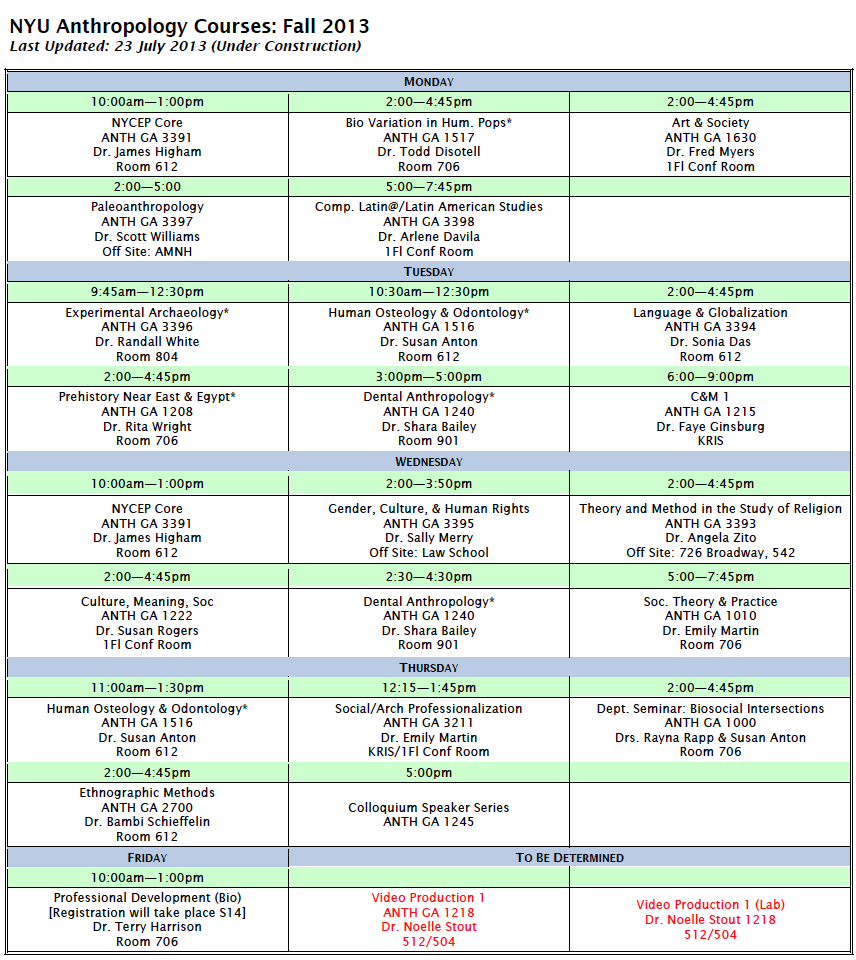 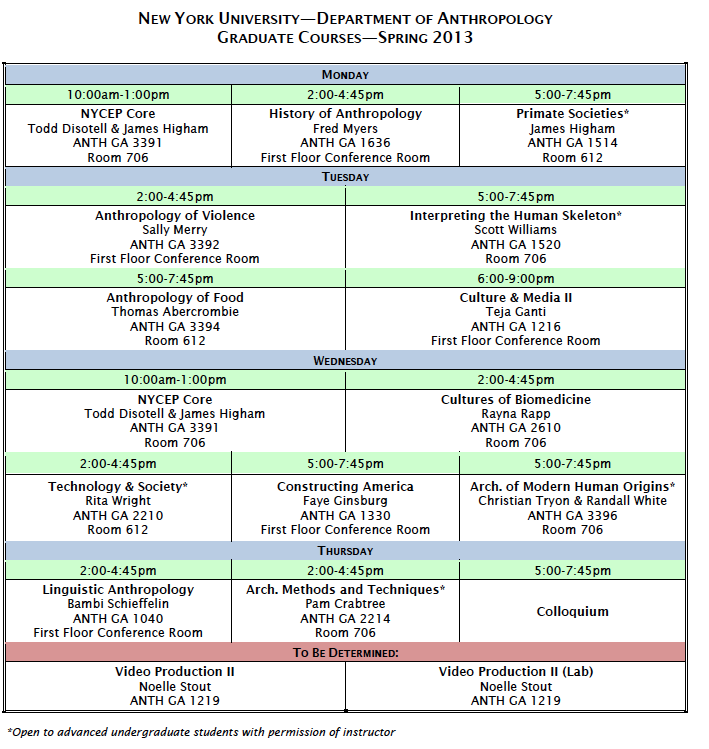 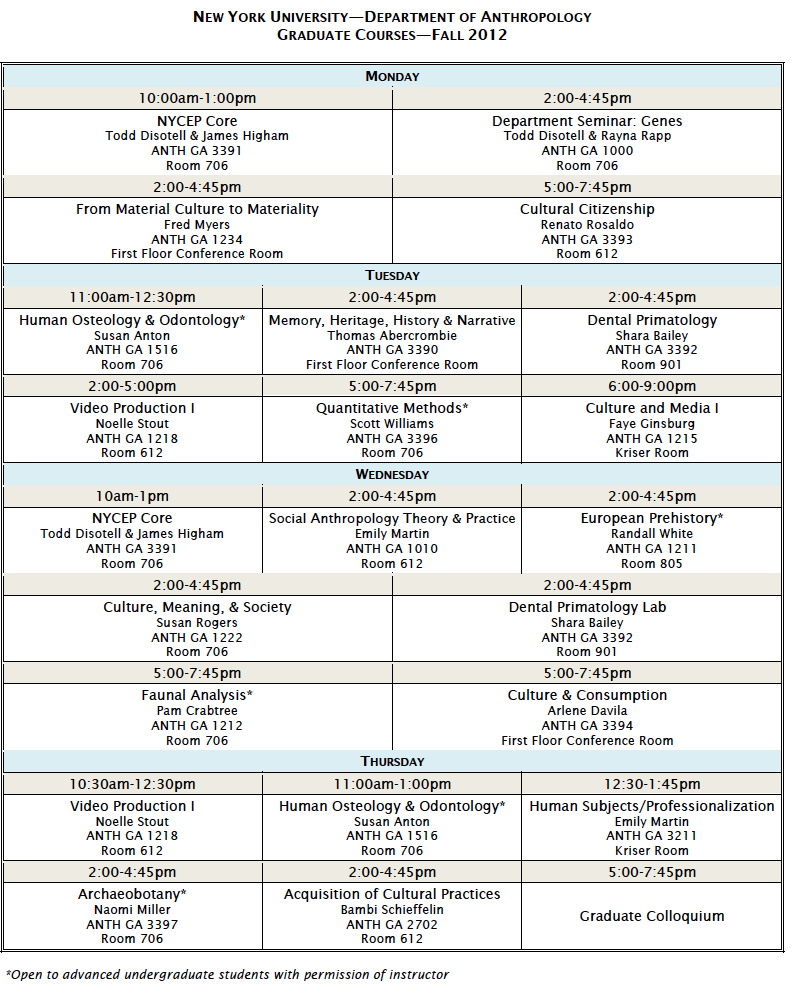 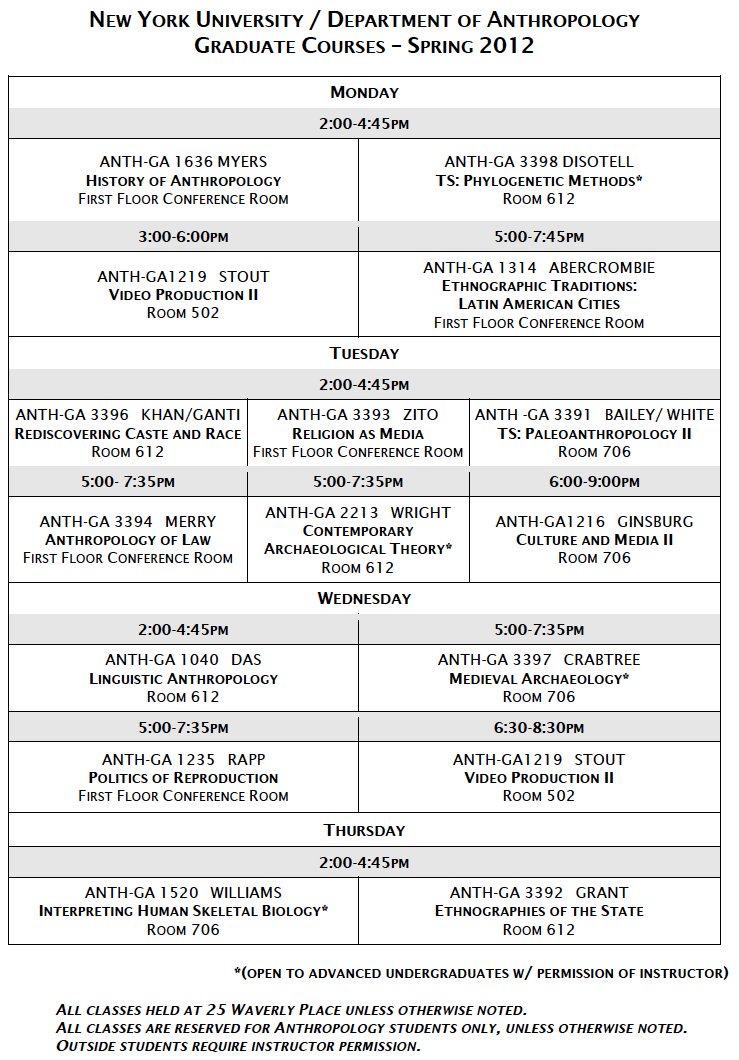 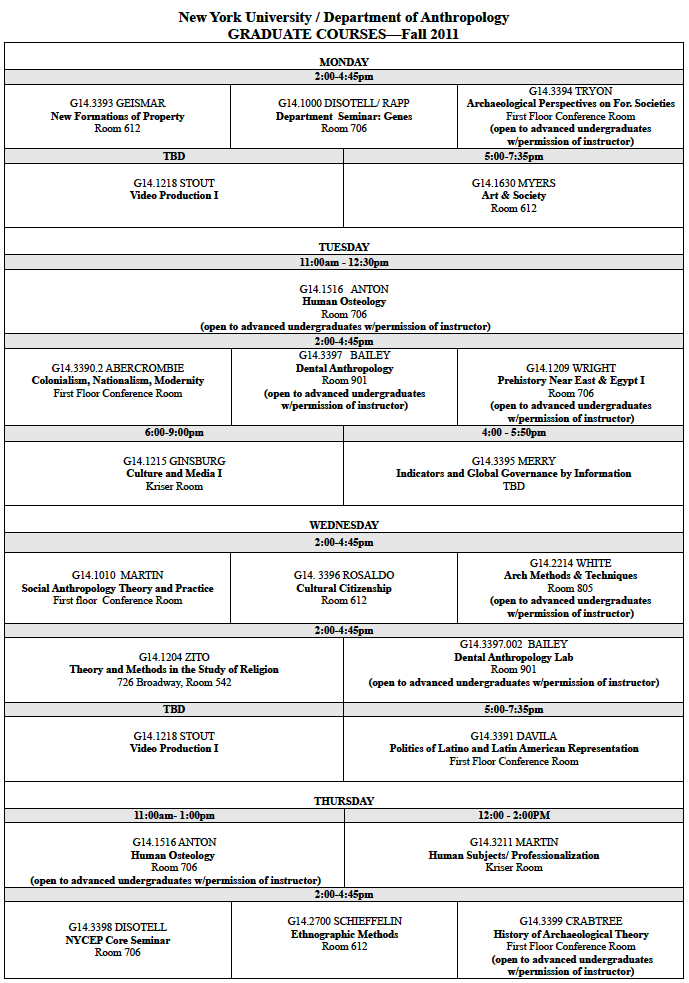 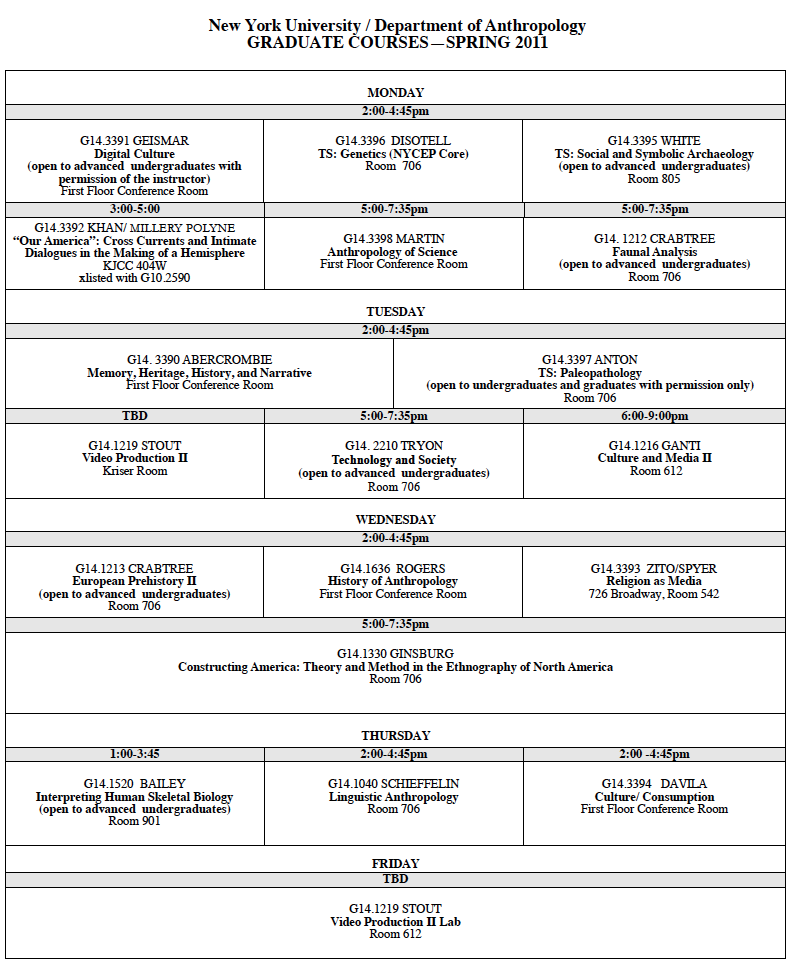 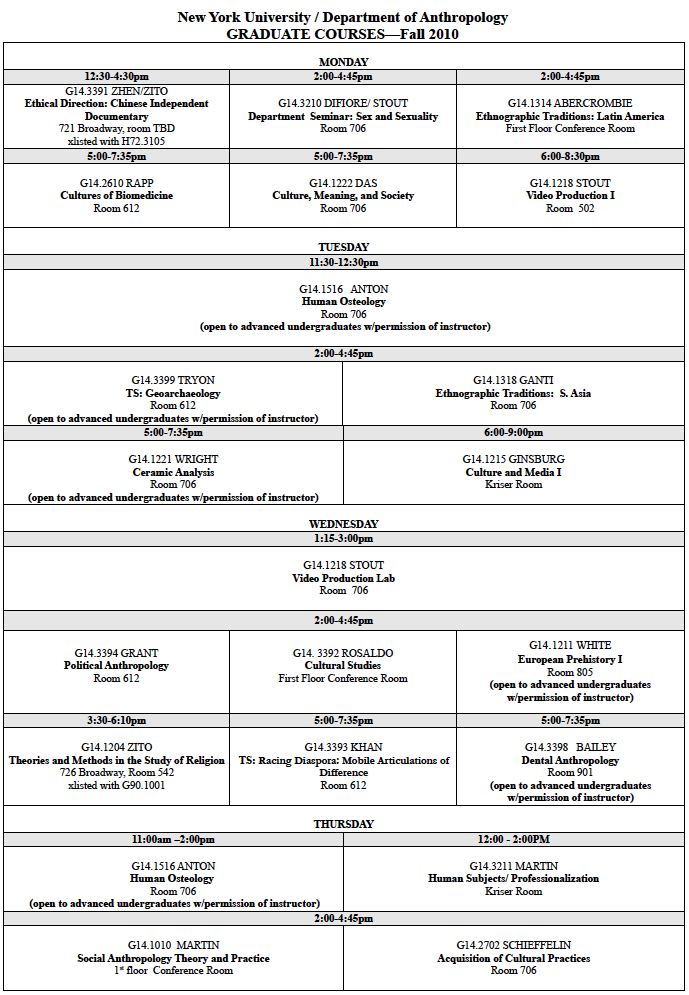