The Poetics and Theory reading group provides a forum for graduate students and faculty to engage in rigorous, focused discussion of texts that have made a significant contribution to the fields of philosophy, literary theory and poetics, social and political theory, and psychoanalysis. The reading group meets regularly to discuss a text, or set of texts, selected at the beginning of each semester on the basis of participants’ current research interests. While students enrolled in the Program in Poetics and Theory are especially encouraged to participate, the reading group is open to all members of the graduate student community, as well as to faculty.

The P&T reading group theme for 2019-2020 is COMMUNITY (broadly construed). We will be reading literary, political, philosophical, and theoretical texts that clarify and complicate our understanding of collective life. We are interested in questions such as: How do communities emerge in alliance, out of resistance, through forms of engagement and disengagement? How have communities been forged through coercion, collective trauma, socio-political crises, environmental calamity, and shared history? What are community’s antitheses and how can we think about the subversion or perversion of a collectivist ideality? What does it mean to appear for and among others, and how should we approach different vectors of visibility? How are communities unavowable, inoperable, minoritized, majoritized, constructed, mediated, and mobilized? We are interested in contract, surveillance, the artwork, immunity, capitalism, civility, race, performance, technology, dystopia, exile, citizenship, ritualism, poetry, democracy, animality, embodiment, gender, sexuality, speech, and violence all within the context of community. 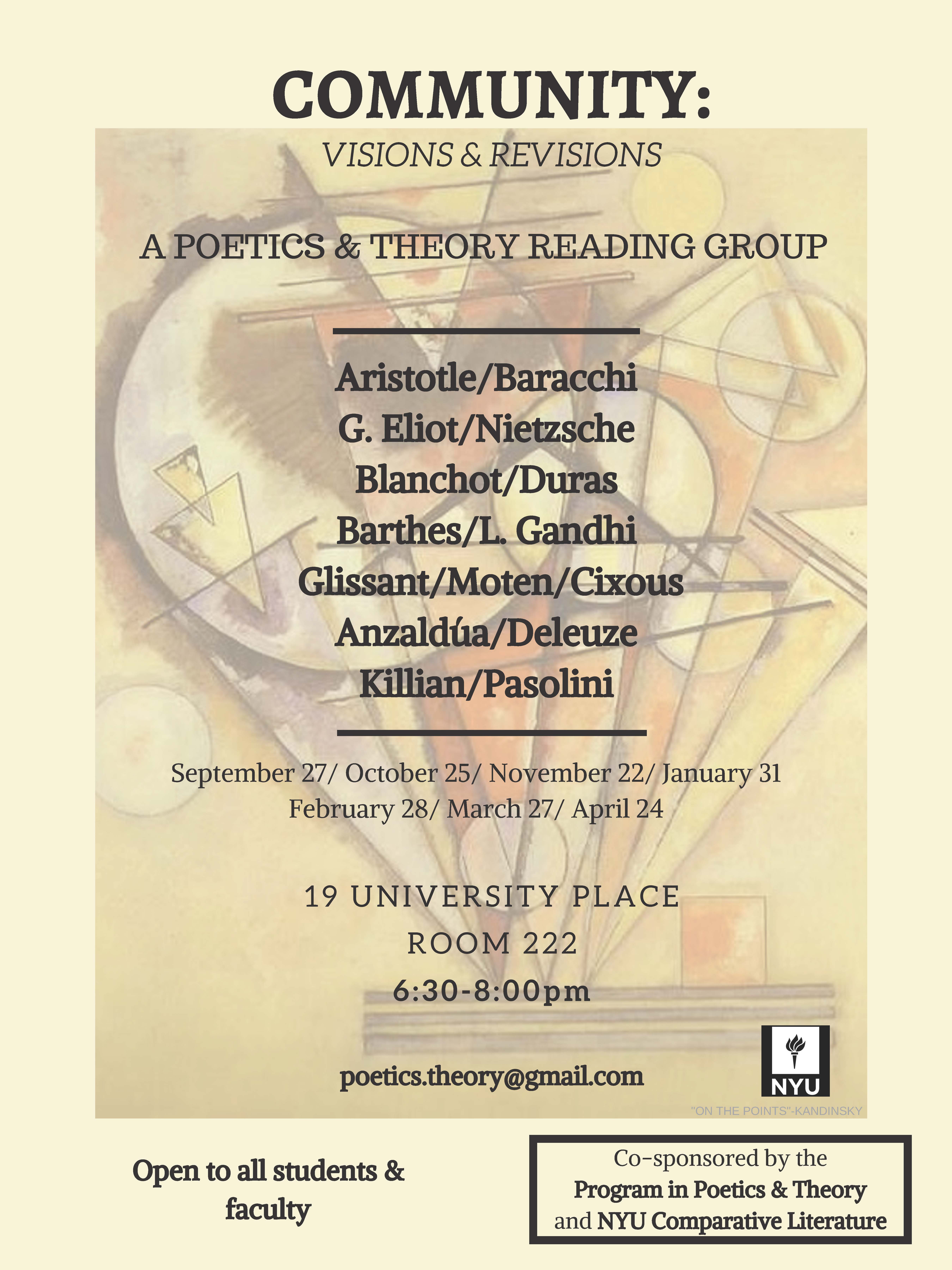 For 2018-19, the reading group has been named PER/VERSE, and is being collaboratively organized by students taking the P&T certificate. It seeks to engage with texts from the fields of theory, poetics, and the teratological spaces in between. Collaboratively organized by Poetics and Theory students, this year’s theme is “perversion,” broadly understood. How has “perversion” come to signify a range of ways for engaging with power, discourse, and disciplines? What does perversion do to various epistemic, political, and sexual apparatuses by twisting them from their original courses?

The reading group this semester will function as a preparation for Prof. Rebecca Comay’s workshop on Hegel’s Phenomenology in April. Students who are planning to attend Professor Comay’s workshop are especially encouraged to participate, but everyone with an interest is warmly welcome.

For participants in the reading group who are planning to take Prof. Comay’s 2 credit workshop (COLIT-GA.2991.002 Hegel’s Phenomenology: Death, Sovereignty, Theater) for credit, it will be possible to sign up for a 2 credit Individual Research so as to form a full 4 credit course.

The reading group will have four meetings before April and one concluding meeting in May after Prof. Comay’s workshop. Our first meeting will be Friday February 17th, 3 pm. Room 305

Jean Baudrillard, The System of Objects (sections reprinted in Selected Writings [1988], Mark Poster, ed.) and The Mirror of Production (Chapters 1-2)

Louis Althusser, On the Reproduction of Capitalism (Chapters 1-4)

Louis Althusser, On the Reproduction of Capitalism (Chapters 5-6 and Appendix 1)

Louis Althusser, On the Reproduction of Capitalism (Chapters 7-8 and “Note on the ISAs”)

Louis Althusser, On the Reproduction of Capitalism (Chapters 9-11)

Louis Althusser, On the Reproduction of Capitalism (Chapter 12)

Martin Heidegger, Being and Time (§10) and The Metaphysical Foundations of Logic (§10)
Jacques Derrida, “Geschlecht I: Sexual Difference, Ontological Difference”

Martin Heidegger, “Language in the Poem” and What Is Called Thinking?  (I)
Jacques Derrida, “Geschlecht II: Heidegger’s Hand”

Marc Redfield, The Rhetoric of Terror: Reflections on 9/11 and the War on Terror

Georg Lukács, “What is Orthodox Marxism?” and “Reification and the Consciousness of the Proletariat” (I)
Antonio Gramsci, “The Study of Philosophy,” “State and Civil Society,” and “Critical Notes on an Attempt at Popular Sociology”

Ernesto Laclau, “Articulation and the Limits of Metaphor”