On Friday, May 6th from 10AM-5PM EST via Zoom, Arthur Ségard and Nicole Grimaldi will host Teratophilia: Transmedial Representations of Hybrid Sexualities!

Teratophilia? Desire for monsters? Let us remember the hesitation of the young Bella between Edward the dark vampire and Jacob the sensual werewolf in the successful Twilight novels and movies (2005-2012). Or the recent reinterpretations of King Kong by Peter Jackson (2005) and The Creature of the Black Lagoon by Guillermo Del Toro (2017), which, unlike the original works, imagine and develop a romance between the monster and the main female character. Let us also consider the popularity, for several years, of the keyword "tentacles" and sexual scenarios that include aliens, monsters and various non-human creatures on pornographic sites. Recently, the Palme d'Or at Cannes (2021) went to Julia Ducournau's Titane (the director declared, upon receiving her prize, "thank you to the jury for letting the monsters in"), a film in which, in a crucial scene, the heroine has sex with a car. Hybrid, "abnormal", in short monstrous desires and relationships abound everywhere. How to interpret these various valorizations of monstrous sexual configurations, in all the semantic richness and ambiguity of this term, and which include non-human, inhuman, "almost human" entities (Hoquet, 2021)? What do they say about our relationship to the body, to sexuality, to the norm?

The sexualization of monsters and non-human bodies is of course not only a contemporary reality. Numerous mythological monsters symbolize an excessive and dangerous sexuality: mermaids, kappas, kelpies, incubi and succubi. We can also think of legendary creatures that take the appearance of seductive women in order to lead men to their doom: Melusine, Lamia, Aisha Kandicha. The stories of vampires, which multiply throughout the 19th century with Sheridan Le Fanu’s Carmilla or Bram Stoker’s Dracula, can be considered consistent with these myths of monstrous sexuality. But it is also possible to bring these works closer to the "scientia sexualis" of the 19th century, and to texts of sexual psychopathology (Krafft-Ebing's Psychopathia Sexualis or Havelock Ellis’ Sexual Inversion), which theorize any infringement of the heterosexual order as a perversion (Haefele-Thomas, 2012). Any sexual practice, any biological or political configuration escaping this heteropatriarchal normativity could then be qualified as "monstrous". We see this, for example, in Jane de la Vaudère's novel Les Demi-sexes (1897), where a female character, who chooses to undergo an oophorectomy, is described as a monster from the moment of her operation, and joins a community of lesbians whose celebrations are reported as black masses or terrifying rituals. Of course, calling people "monstrous" does not prevent them from being fetishized. Sawtche Baartman, exposed as freak show attraction under the name "Hottentot Venus" in the early nineteenth century was, according to some sources, forced into prostitution (Crais & Scully, 2009). This particular case is part of a general history of colonization, where the objectification and dehumanization of colonized people went hand in hand with their exoticizing sexualization (Bindman, 2002; Bancel et al., 2014).

If the 19th century has been characterized by the pathologization of certain sexual configurations, and their stigmatization as "monstrous," from the 20th century onwards the stigma is reclaimed, particularly after "sexual liberation" and under the influence of North American countercultural movements. In The Rocky Horror Picture Show (1975), Frank-N-Furter, an alien heavily spotlighted in the film, has sexual relations with at least five other protagonists, both human and non-human. The short story Bloodchild by Octavia E. Butler and the illustration book Androla in Labyrinth by Shusei Nagaoka, both published in 1984, feature sexual relationships between humans and aliens. The conflation between the purportedly sub-human categories of monstrosity and animality has also been routinely explored in literature and film, with animal-like monsters or monster-like animals involved in hybridic sexual entanglements both with and beyond the human. Recall Robertson Davies’ The Manticore (1977), wherein the mythic monster that populates the dreams of the main character is not only an amalgamated projection of animal, monster, and human, but is seen as representing the protagonist himself—his base, animal desires that must be tamed by his Jungian anima, or inner feminine energies. In "Meet Me In Daegu," the sixth episode of the recent HBO drama-horror show Lovecraft Country (2020), the character of Ji-Ah is revealed to be possessed by a kumiho (a nine-tailed fox spirit) and can only be returned to her human form if she has sex with 100 men and kills each of them by penetrating their bodies with her powerful tails. How do, in queer theorist Mel Y. Chen’s terms, such "animacy hierarchies" and trans configurations (with respect to both gender and species) contribute to threatening as well as liberatory representations of inter-species sexuality? (Chen, 2012).

The figure of the monster, as we know, has also been reclaimed and revalued by Paul B. Preciado in his text Can the Monster Speak? (2020), where this particular locutionary act (speaking as a monster) allows him to radically question gender binarism and to signal towards another, utopian system: "I prefer my new condition of monster to that of man or woman, because this condition is like a foot which advances in the vacuum by indicating the way towards another world." Is it this recent ideological reinvestment in the monster that has made it so desirable, in literature, film and pornography? To quote once again Julia Ducournau: "the monstrosity, [...] which crosses my work, is a weapon and a force to push back the walls of normativity that enclose us and separate us".

§  the political uses of these sexualizations (stigmatization as well as reclamation)

§  the relationships uniting dehumanization and fetishization, notably in a (post)colonial framework

§  whether monstrosity is a regression, an advancement, or a departure from the category of the human 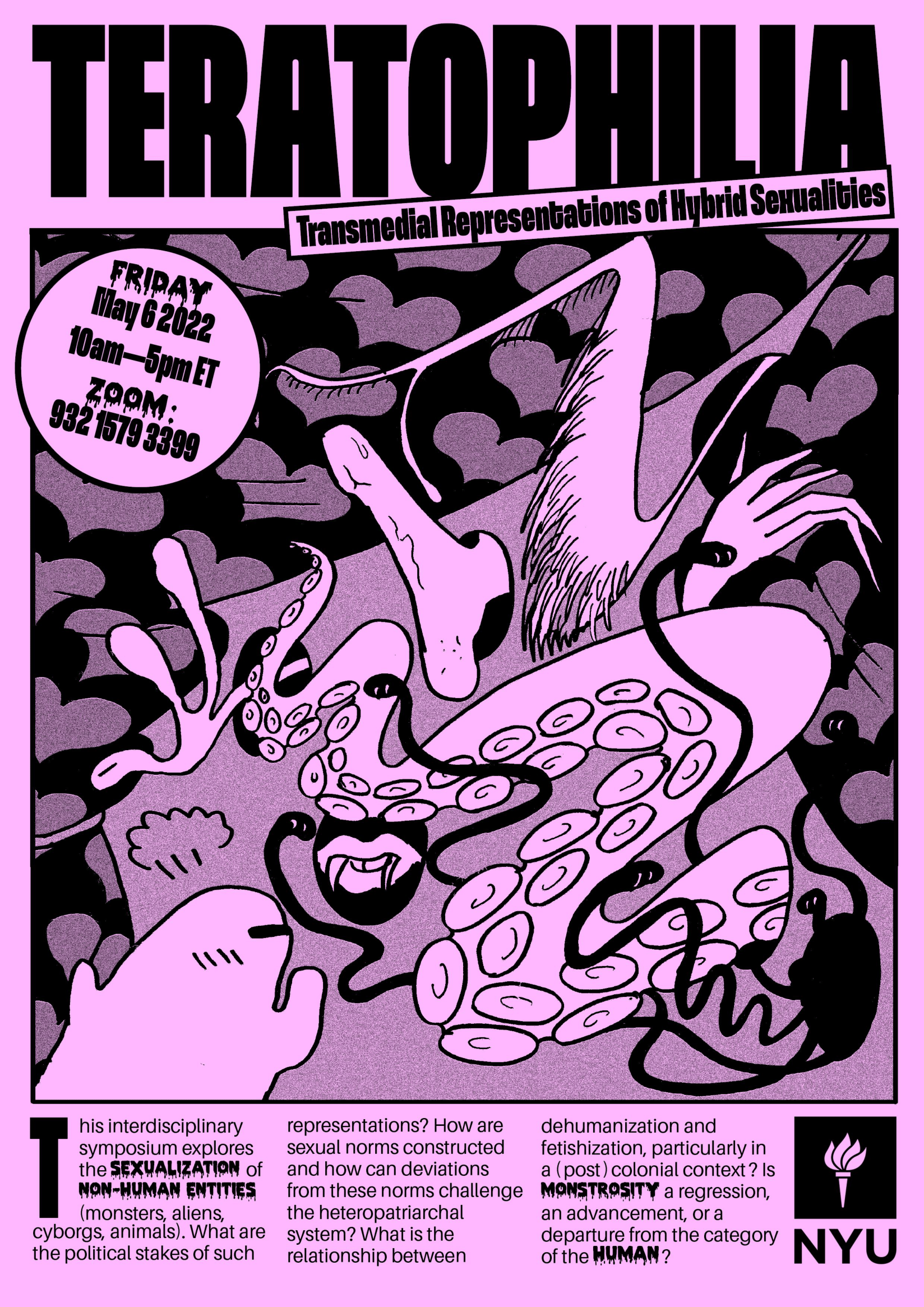 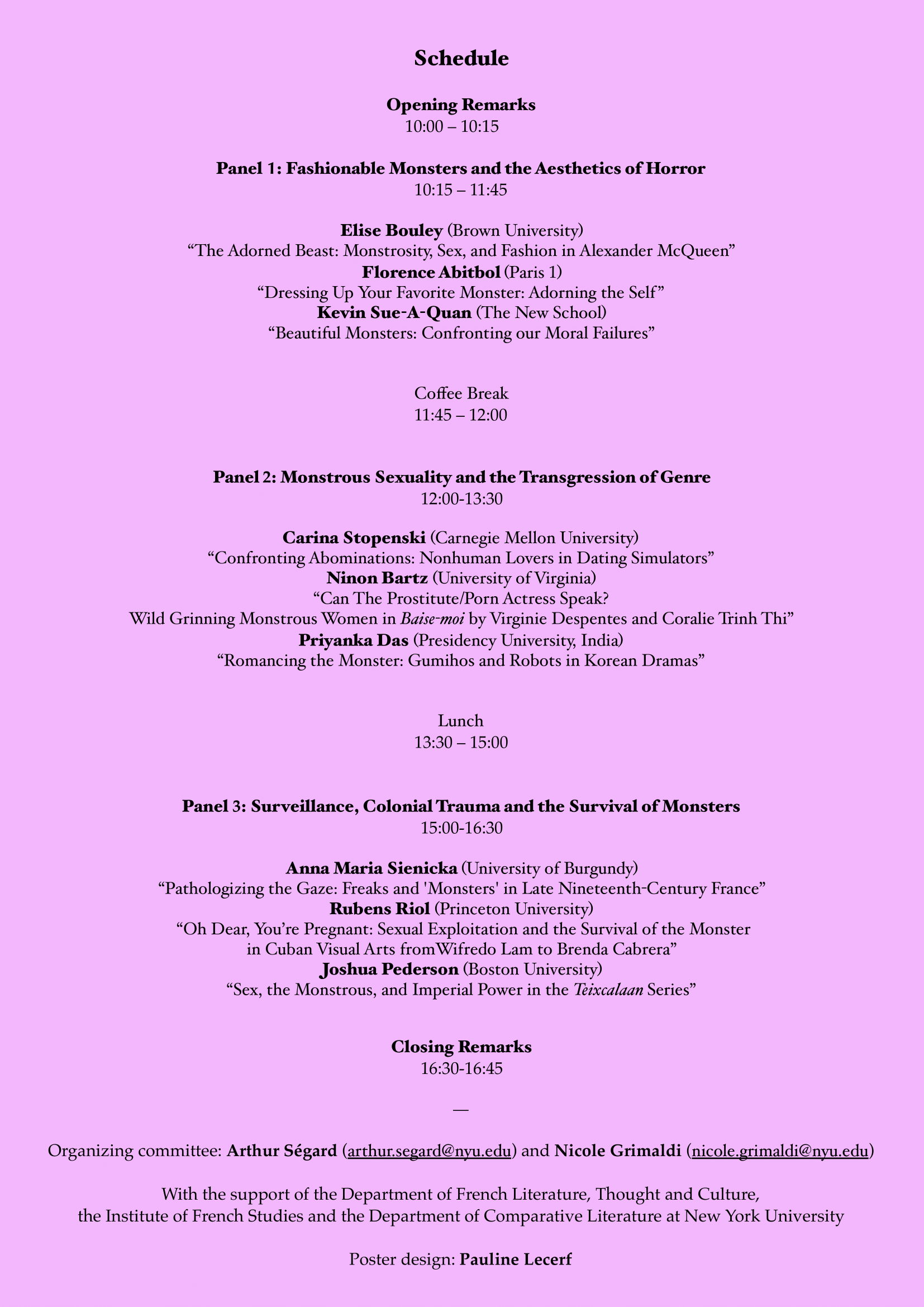