Of Hackers and Cowgirls: Translating Sex and Class with McKenzie Wark

On Tuesday, November 2nd at 5 PM EST via Zoom, Mariano López Seoane and the Department of Comparative Literature will host Of Hackers and Cowgirls: Translating Sex and Class - a conversation between McKenzie Wark and Mariano López Seoane, moderated by Emily Apter!

Pervasive in history, theory and ethnography, “sex” and “class” seem so omnipresent we have come to believe they are universal. While any zone of intense interaction across languages would prove this wrong, the task of translating McKenzie Wark is especially instructive: it makes it impossible to forget that all areas of life are culturally situated.

Bending genres and trespassing stylistic barriers, Wark’s writing is difficult to capture, and almost impossible to imagine outside its mother tongue. This is true of works like A Hacker Manifesto (2004), a brilliant array into what we can call dry theory, in which language is almost depleted of all affective echoes; and of Reverse Cowgirl (2020), a wild self-examination through tales of loss, abandonment, intoxication and transitions electrically charged with bouts of intimacy and declarations of (sub)cultural allegiance. In these texts, and others, the problem is not so much conceptual transparency, or lack thereof, but a commitment to rhythm, to the pacing of thought, that finds perfect expression in her peculiar owning of English, both personal expression and testament of her knack for resistance through rituals.

Can we make audible in other languages the submerged social and cultural conditions of her thought? How does her talent for inventing genres for multiple genders translate into Spanish? How do we situate “sex” and “class” without losing their faux – but still operative - universal appeal? Can translation possibly hold up her outstanding takes on transition, queer sexuality and class formation?

McKenzie Wark (she/her), awarded the 2019 Thoma Prize for writing in digital art, is the author of A Hacker Manifesto, Gamer Theory, 50 Years of Recuperation of the Situationist International, and The Beach Beneath the Street, among other books. She teaches at the New School for Social Research and Eugene Lang College in New York City.

Mariano López Seoane (he/him) is Visiting Professor at the Department of Comparative Literature at NYU and the Director of the Masters’ Program on Gender Studies and Policies at UNTREF in Buenos Aires. He has translated Wark’s Reverse Cowgirl (Caja Negra, 2022).

Emily Apter (she/her) is Silver Professor of French and Comparative Literature at NYU. She has worked extensively on translation and is the author of The Translation Zone and Against World Literature. On the Politics of Untranslatability. 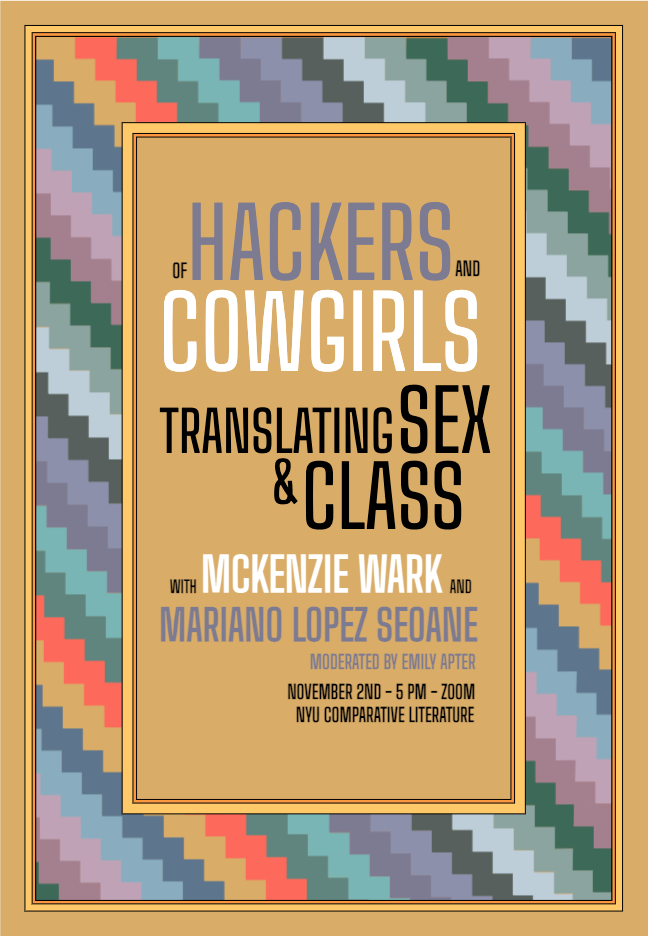