Black Studies and the Contemporary Student - Marina Bilbija: When the Sojourner Came to Harlem On Tuesday, October 12th at 5 PM EST via Zoom, Jay Garcia and the Department of Comparative Literature will host the first installment of the Black Studies and the Contemporary Student Series with Marina Bilbija!

When the Sojourner Came to Harlem: Black Diasporic Décalage in the Negro World's 1922 Version of Kobina Sekyi’s "The Sojourner”

This talk shows how the Negro World’s reprinting of Kobina Sekyi’s “The Sojourner,” produced a new version of this Ghanaian text. This new version of Sekyi’s poem rearticulated its titular sojourner: a figure for West African (or, more specifically, Fante) modernity with those more commonly associated with the Americas and “the New Negro.” (These included migrants from the US South and the Caribbean but also figures of diasporic alienation from Africa, “three centuries removed” as Countee Cullen’s famous poem put it). Originally serialized in five parts in the Gold Coast Leader between 1919 and 1922, Sekyi’s poem detailed the political awakening of an elite African student residing in Britain, traced his subsequent return to West Africa, and prophesied the dawn of an African and Afro-diasporic golden age. I read the Negro World’s editorial interventions into this poem (its reformatting, the insertion of a gloss and an introduction, and the elision of the original version’s fifth section, “To Albion”) as indices of what Brent Edwards has termed “diasporic propping up” of décalage among African and African Americans. More specifically, they index attempts to prop the differences between African and African American (and, to an extent, Caribbean) representations of Black alienation and African belonging (Practice of Diaspora, 14). The commingling of these different figures of Black displacement and exile in newsprint—in a paper that, for a time, was strongly associated with “Back to Africa” Movements—brings into high relief their previous splintering across different histories of colonization and slavery in the Black Atlantic. Equally importantly, it reveals the different articulations of antagonisms to Anglophone cultural imperialism that accompanied this splintering.

Marina Bilbija is an Assistant Professor of English and an affiliated faculty member of the African American Studies department at Wesleyan University. In the Spring of 22, she will be a fellow at the Schomburg Center’s Scholars in Residence Program, where she will be working to complete her book manuscript, “Worlds of Color: Black Print Internationalism before Decolonization.” This project examines print networks and collaborations between Black and anti-racist editors in the UK, US, and Nigeria between the 1860s and 1930s. She refers to the new Black, Anglophone, and inter-imperial literary and political sphere that emerged out of this culture of reprinting as “the Black Anglosphere.” Her other scholarly interests include interdisciplinarity in the Black intellectual tradition (especially in the work of W.E.B. Du Bois) and Black British cultural production before Windrush. Her work has appeared in American Literary History, Atlantic Studies, Annals of the American Academy of Political and Social Science, and  Modern Fiction Studies. 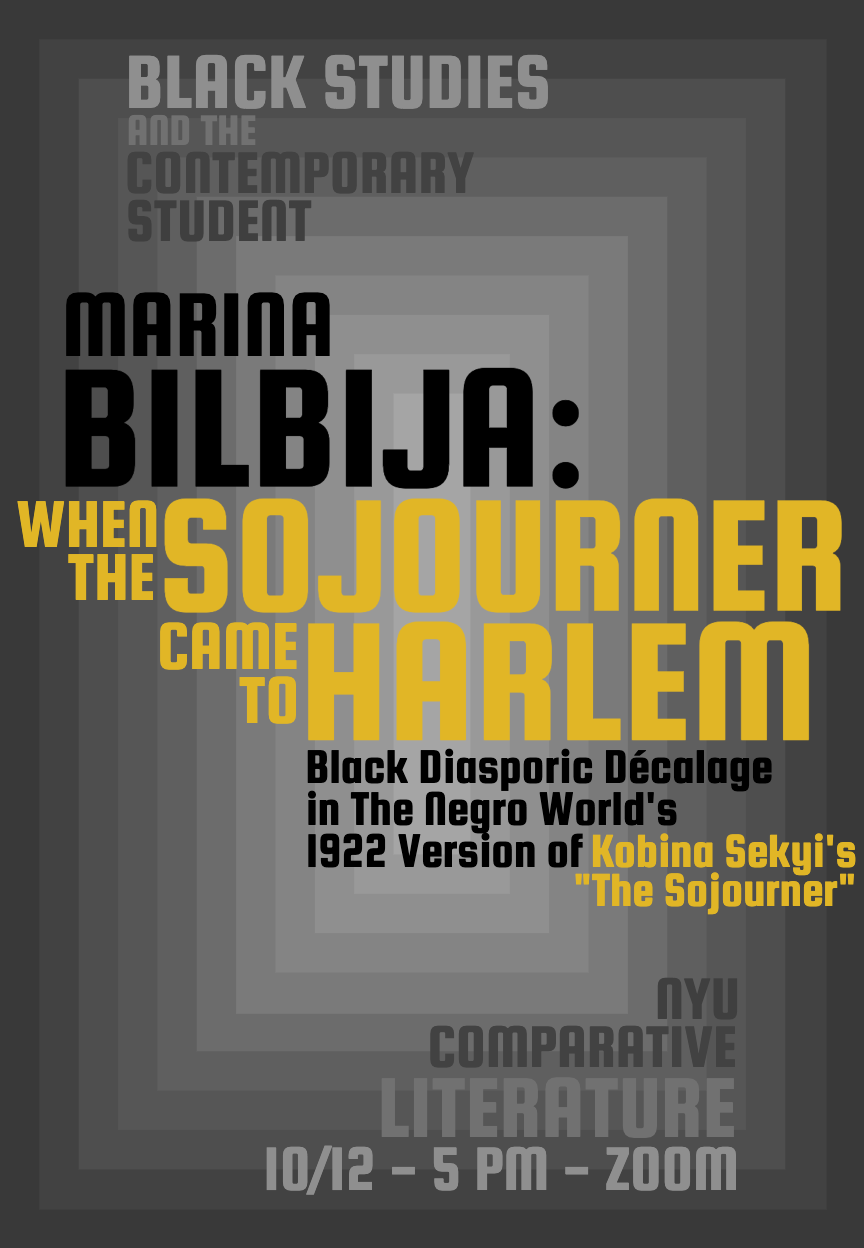