On Thursday, April 29th at 5 PM EDT Mariano Lopez Seoane and the Department of Comparative Literature will host the third and final installment of The End of the World: Thinking from Latin America - Ruins of the Lettered City: Writing in Latin America Today, a panel discussion with Mariana Enriquez, Lina Meruane, and discussants Santiago Ospina Celis and Ivan Hofman!

The End of The World: Thinking from Latin America

A series of conversations

Far from economic, political and cultural centers, Latin America has always seen herself as peripheral, a position which at times was equated with dependency and submission, and at times understood as unique and providential: living at the end of the world meant that ties to traditional modes of thinking and creating were looser, weaker, more fragile. Hence an optimistic assessment of the region as one prone to irreverence, subversion and invention, countered and obscured by the persistence of social and economic injustice, and an insidious political discontent. Now that the whole world is at its end, and in many senses in the wake of Latin America, her peculiar way of weathering epochal storms and imagining livable futures come hell or high water looks particularly inspiring. It is with the aim of tapping into this well of intellectual and creative resources that we present a series of conversations featuring a diverse cast of writers, activists, critics, curators, artists and filmmakers operating in/thinking the region and the world.

Ruins of the Lettered City: Writing in Latin America Today

Critics and historians have highlighted the power of written discourse in the historical formation of Latin American societies, and emphasized the role of cities in deploying and reproducing that power. As their role in society widened, and with the gradual emergence of a mass reading public, the letrados faced social and political challenges to their authority, which led to a decentering, and then to the marginalization, of the intellectual as public figure. This fall of the lettered city has shaped Latin American writing in the last decades, giving it a peculiar pessimistic and sometimes nostalgic tone. In this conversation, writers and critics from Latin America discuss the current literary landscape, interrogating the force of writing and imagining new tactics for political intervention.

Mariana Enriquez (Buenos Aires, 1973) is one of the most spellbinding narrators in Latin American literature. Her debut novel BAJAR ES LO PEOR (1995) was published when she was a teenager, followed by the novel CÓMO DESAPARECER COMPLETAMENTE (2004) and the story collection LOS PELIGROS DE FUMAR EN LA CAMA (2009; 2017). She has been featured in countless anthologies, as well as in The New Yorker, Freeman’s, McSweeney’s, Granta UK, Granta en Español, Virginia Quarterly Review and Asymptote. She also has a collection of chronicles on cemeteries she has visited around the world, titled ALGUIEN CAMINA SOBRE TU TUMBA (2014). Her breakthrough story collection LAS COSAS QUE PERDIMOS EN EL FUEGO (2016) entered the bestseller lists in Spain and Argentina, and is translated into 30 languages, and her novel NUESTRA PARTE DE NOCHE won the Herralde Novel Prize in 2019, the Premio Celsius, the Premio Kelvin 505, and most noteworthy, the Premio de la Crítica in 2019.

Lina Meruane is an award-winning Chilean writer and scholar. A prolific author, she has published two collections of short stories and five novels. Translated by Megan McDowell into English are her latest: Seeing Red (Deep Vellum) and Nervous System (Graywolf). Meruane has written several non-fiction books, among which is her essay on the impact and representation of the AIDS epidemic in Latin American literature, Viral Voyages (Palgrave MacMillan). She received the prestigious Sor Juana Inés de la Cruz Novel Prize (Mexico 2012), the Anna Seghers Prize (Germany, 2011) as well as grants from the Guggenheim Foundation, the National Endowment for the Arts, and a DAAD Writer in Residence in Berlin, among others. She currently teaches Global Cultures and Creative Writing at New York University. 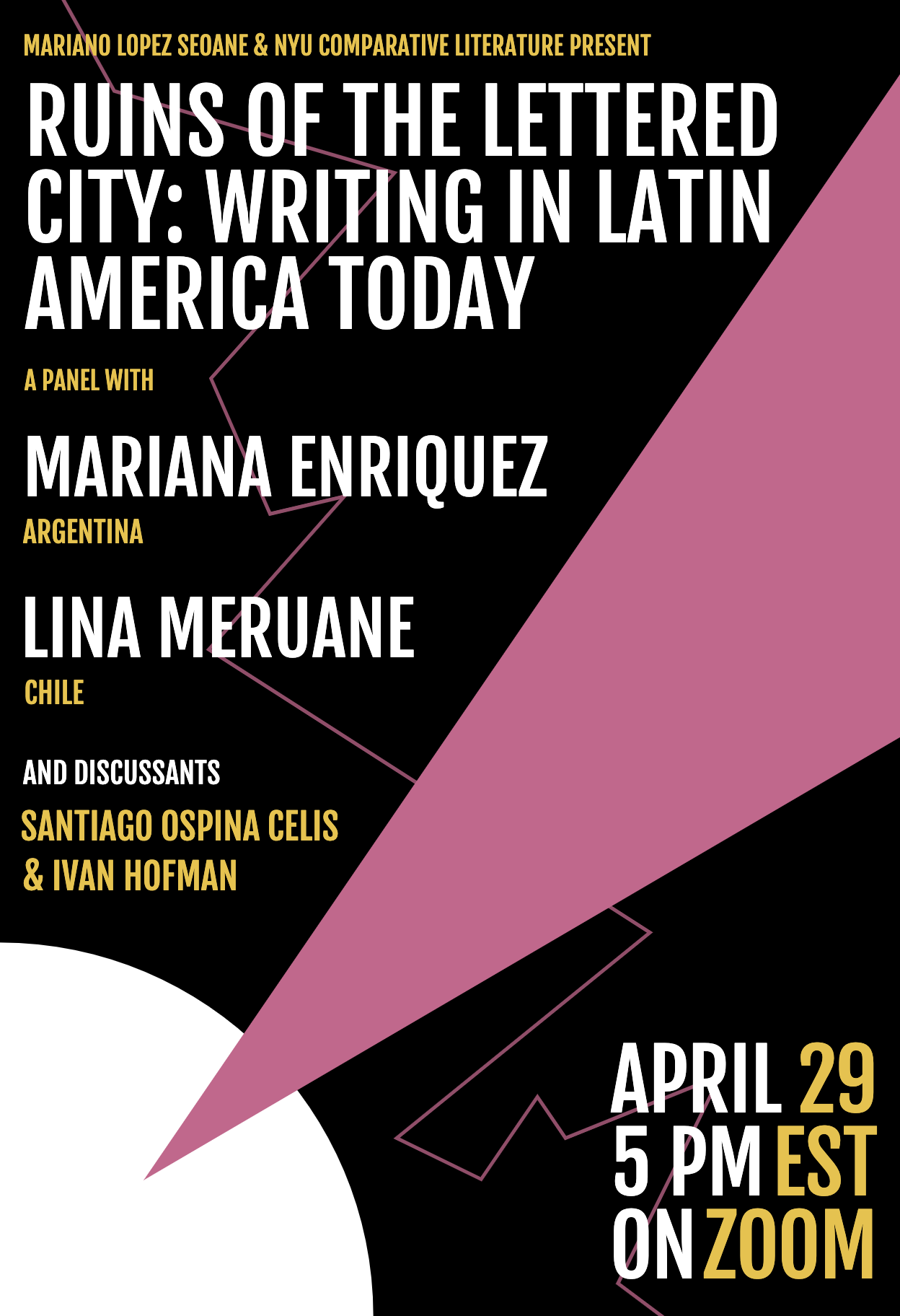 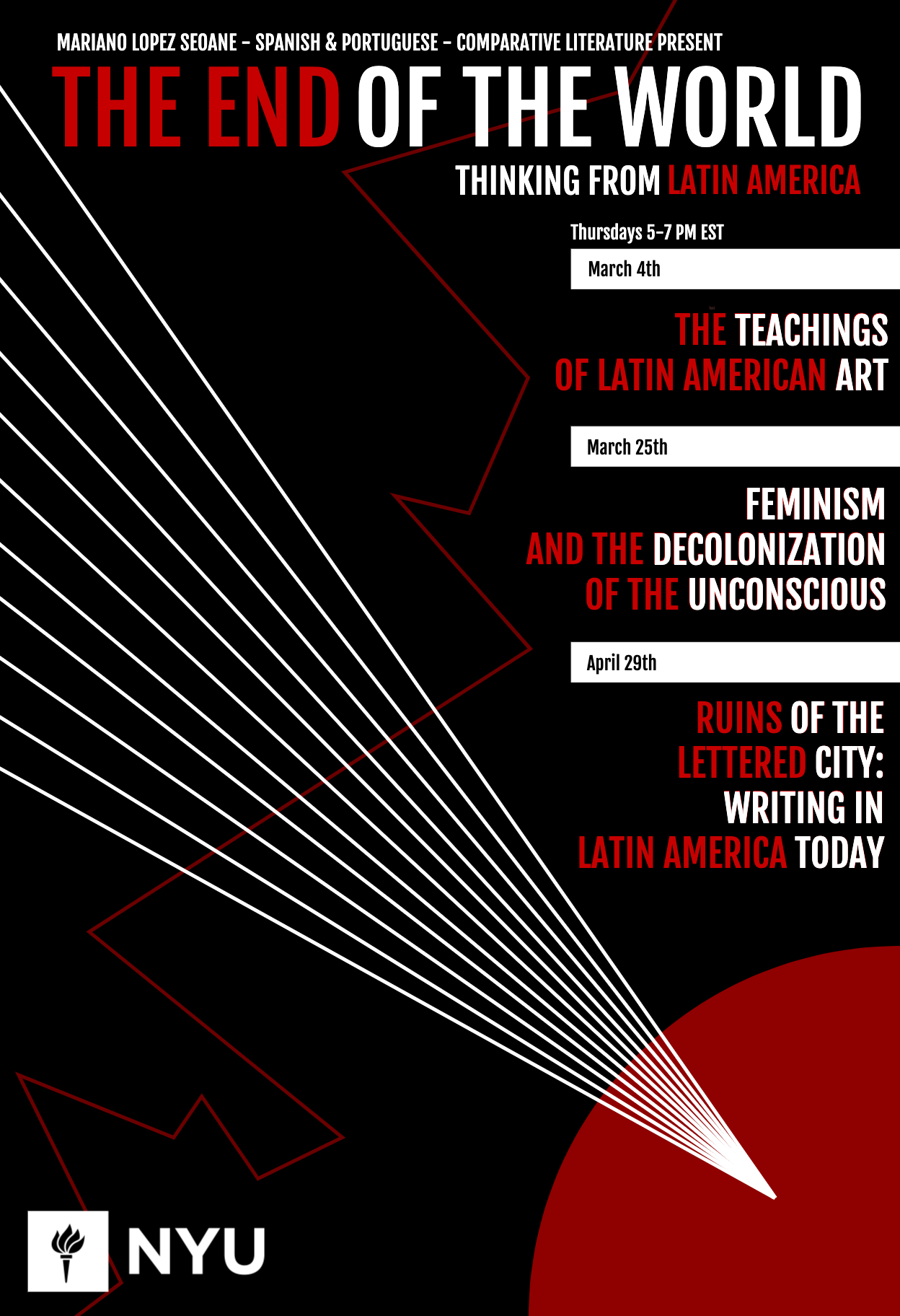