Jeff Sacks was educated in Cairo, Beirut, Ann Arbor, Austin, and New York, where he earned a Ph.D. at Columbia University at the Institute for Comparative Literature and Society and the Department of Middle East and Asian Languages and Cultures (now the Department of Middle Eastern, South Asian, and African Studies). He writes and teach around a series of questions, with which he's engaged in in various ways, separately and together, and which he lists as follows: (1) poetics, (2) philology, (3) violence and the law, (4) Arabic poetry, (5) medieval Arabic philosophy, (6) Arab Jewish writing, (7) colonialism and the state, (8), deconstruction, (9) Ibn Khaldun, (10) Arabic and Islamic studies, (11) the question of Palestine, and (12) loss. His first book, Iterations of Loss: Mutilation and Aesthetic Form, al-Shidyaq to Darwish (New York: Fordham UP, 2015), which reads nineteenth through twenty-first century texts in Arabic, Hebrew, and French, was awarded the Harry Levin Prize of the American Comparative Literature Association (2016). He is presently writing two books. The first, about simplicity, is called “Simplicities: A Colonial Archive”; the second is called “For Decolonization: The Lyric Poem and the Question of Palestine.” 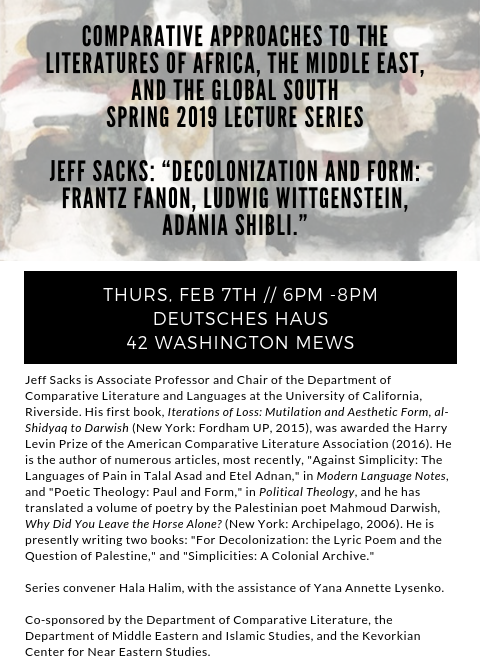