Slavoj Žižek engages Nikki Johnson-Huston, who recently described how “white Liberals have hijacked the conversation about diversity, political correctness and what topics we should be outraged about.” His lecture provides some theoretical background and discussion points to complement her perspicacious insights. The status of the university campus as locus for racialist mappings will be scrupulously reviewed.

Slavoj Žižek, Ph.D., is a senior researcher at the Institute of Sociology, University of Ljubljana, Slovenia, and a visiting professor at a number of American Universities (Columbia, Princeton, New School for Social Research, New York University, University of Michigan). He obtained his Ph.D. in Philosophy in Ljubljana studying Psychoanalysis. He also studied at the University of Paris. Slavoj Zizek is a Hegelian philosopher, Lacanian psychoanalyst, and Marxist social analyst. He is the author of  The Indivisible Remainder, The Sublime Object of Ideology, The Metastases of Enjoyment, Looking Awry: Jacques Lacan through Popular Culture, and  The Plague of Fantasies and The Ticklish Subject. His latest publications are  Disparities and  Antigone (both at Bloomsbury Press, London).

This talk will be introduced by Professor  Avital Ronell, a University Professor of the Humanities at New York University and Jacques Derrida Professor of Philosophy and Media at The European Graduate School in Switzerland. In her work and teaching, Avita Ronell has relentlessly enfolded Germanistik in deconstructive reading practices, frequently taking the off-ramp into media technology and political theory. She taught an annual course with Derrida for a decade at N.Y.U. Avital Ronell gave 9 performance lectures at Centre Pompidou, beginning with a conversation and film premiere of/with Werner Herzog and including a dance, video and discussion with Judith Butler. She also wrote and performed a critical autothanatography at Hau3 in Berlin, "What was I Thinking? A Spectral Colloquy," about the one night's stand of Hermeneutics and deconstruction--of which she claims to have been  the illegitimate result. Most recently she offered a lecture at the Théâtre de l'Odéon with Pierre Alferi on the disappearance of authority (Arendt, Kojève, Marcuse, Luther, et al). Recent works include  The Test Drive, The Ueberreader, Fighting Theory, and  Loser Sons: Politics and Authority. A conference celebrating the 25th anniversary of The Telephone Book was held at Deutsches Haus at NYU two years ago.

Racial Enjoyments: What the Liberal Left Doesn’t Want to Hear is a  DAAD-sponsored event. 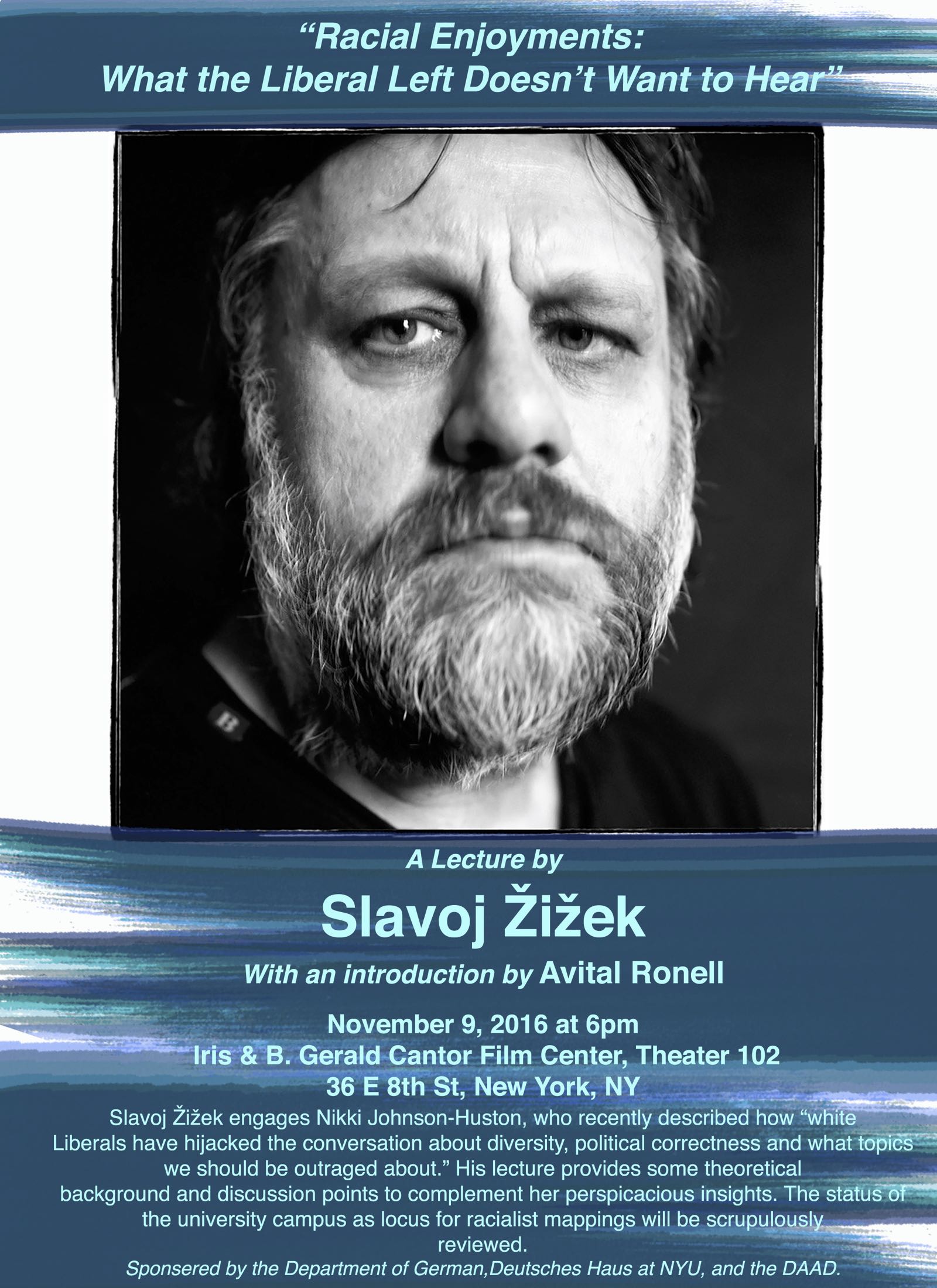