Apocalypse-Cinema: 2012 and Other Ends of the World 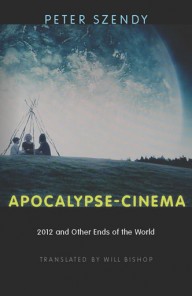 Looking at blockbuster movies that focus on general annihilation while also paying close attention to films like Melancholia, Cloverfield, Blade Runner, and Twelve Monkeys, Peter Szendy suggests, in Apocalypse-cinema, that in the apocalyptic genre, film gnaws at its own limit. Apocalyptic cinema is, at the same time and with the same double blow, the end of the world and the end of the film.

Joining Szendy for a conversation on the consummation and the (self-) consumption of cinema--in the form of an acinema that Lyotard evoked as the nihilistic horizon of filmic economy--will be Emily Apter. Our speakers will take on the apocalyptic genre not just as one genre among others, but as a reflection on the very conditions of possibility of cinema.

In English. Free and open to the public. No RSVP necessary.