Four members of the NYU Classics community participated in the proceedings of the 2018 annual joint meeting of the Archaeological Institute of America (AIA) and the Society for Classical Studies (SCS), which was held from January 4-7 in snowy Boston.

At the SCS, fifth-year graduate student Chris Parmenter gave a paper, "Semeta lygra: Reading hieroglyphics with Archaic Greeks" as part of the panel "Ritual and Religious Belief." In his talk, Chris presented tentative conclusions from his study of scarab inscriptions at Archaic Greek sanctuaries.

At the AIA, recent NYU Classics Ph.D. and current language lecturer Dr. Calloway Scott presented on "Votives, Bodies, and Intersubjective Viewing in Greek Healing Sanctuaries" during a colloquium on "Accessing Subjectivity in Antiquity Through Texts and Artifacts." Also at the AIA, undergraduate Claire Seidler presented her paper "Brauron: Beyond Bears," in which she assesses material and textual evidence for Brauron as a site of integrated ritual and education, at the Undergraduate Paper Session.

Finally, to celebrate 25 years of excavations on Yeronisos, off the western coast of Cyprus, Prof. Joan Breton Connelly convened an AIA panel, "Yeronisos off Cyprus: Twenty-Five Years of Discovery on 'Sacred Island'" to showcase the research that she and her team of collaborators have undertaken over the years. Her report and the panel proceedings are below.

We congratulate these members of NYU Classics for representing the department and showcasing their exciting research at this international event. 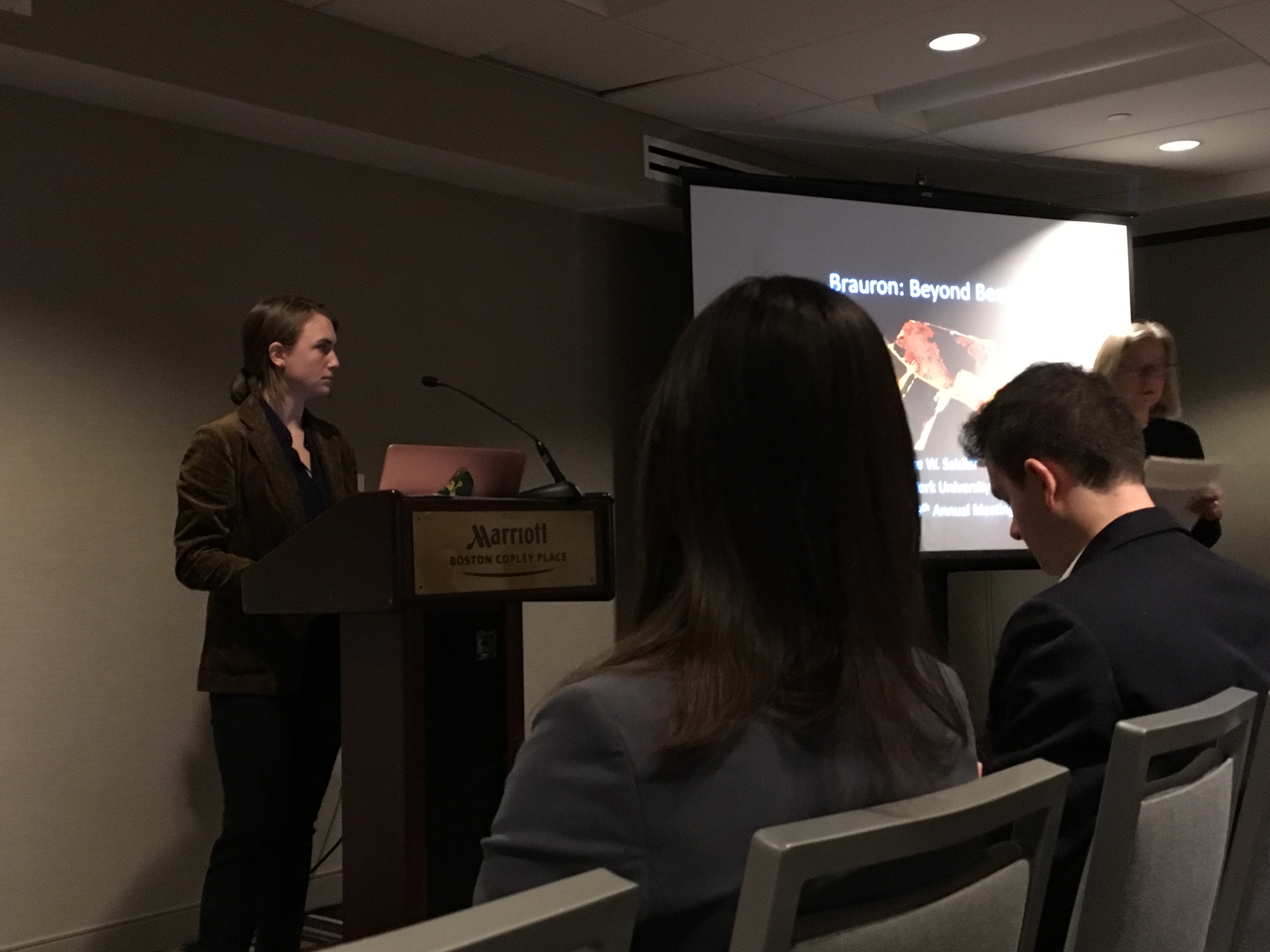 Above: NYU senior Claire Seidler, who is majoring in Classics and Fine Arts, presenting at the AIA Undergraduate Paper Session.

Yeronisos off Cyprus: Twenty-Five Years of Discovery on “Sacred Island”

During the first century B.C.E., vast resources were invested in the small un-inhabited islet of Yeronisos, just off the shores of western Cyprus north of Paphos. Circled by steep cliffs and lacking a water source, Yeronisos was an unlikely and challenging place for settlement and yet, within a few years, “Holy Island” was transformed into a significant destination.  A cistern with broad fan-shaped impluvium was built for the collection of water. A quarry was dug for gathering construction materials including marl for mortar and calcarenite rock for rubble foundations.  Prefabricated limestone ashlars with mason’s marks were brought over from the mainland, along with architectural members showing elaborate cornice mouldings, Ionic half columns, Doric friezes, and lion’s head waterspouts. The interior rooms of the buildings were plastered white and decorated with yellow and red paint. A complex of square rooms filled with pottery bears witness to food preparation and consumption. These structures were topped with terracotta roof tiles, bearing witness to some of the most elaborate late Ptolemaic structures to survive on Cyprus.

In 15 B.C. a great earthquake toppled these buildings.  Destruction debris sealed the well-preserved floors beneath, filled with imported and local Hellenistic fine and plain ware pottery, lamps, coins, ostraka, and amulets. Bronze coins minted at Paphos and dating to the reign of Cleopatra and her son Ptolemy XV Caesar (47-44 B.C.) give evidence of especially robust activity during the final years of Ptolemaic rule.

Over the past twenty-five years, the New York University Yeronisos Island Excavations have unearthed a series of rare (if not unique) finds: the only Ptolemaic ostraka found to date on Cyprus; a stone parapegma showing a monthly calendar; limestone stamp seal amulets decorated with both traditional Cypriot and Ptolemaic Egyptian motifs; and a circular platform that may well be a dancing floor.  Pinakes, stone trays with compartments, amulets, and a scarab showing Sekhmet are among objects that give evidence of ritual activity. An ostrakon reading “Apollo” may be the abbreviation of a personal name (“Apollonios?”) or the name of the divinity worshipped on “Holy Island.”

The colloquium brought together a team of international scholars who have studied the Yeronisos material for many years.  This was a first opportunity for the team to present at the Annual Meetings of the Archaeological Institute of America and led to very fruitful discussions.  Feedback from the audience will help team in preparing chapters for our book The Island Beyond the Island: Eco-Archaeologies of Yeronisos off Cyprus, a work that explores intersections of the Ptolemaic Egyptian and indigenous Cypriot cultural orbits.