Roundtable: Food and the Hispanic World across Time & Space

This event will be ONLINE and in ENGLISH. Captioning will be provided.

As a part of the KJCC 25th Anniversary Program, please join us for a roundtable discussion on Food and the Hispanic World across Time & Space featuring Rebecca Earle (Warwick), Lara Anderson (Melbourne) and Melissa Fuster (Tulane). Moderated by Rosi Song (Durham).

Food is something that can unite but also divide us. We develop tastes and attachments to ingredients, dishes, traditions depending on where, when, and how we grew up, with whom we shared our meals, who cooked for us or for whom we prepared meals. To think about FOOD in the (GLOBAL) HISPANOPHONE world means to think about food across a wide geography, a long historical period, contact between people from different races, products from different fauna and flora, and, above all, to think of MOVEMENT.

How have food related products or practices traveled with people? How have these practices sustained them until they reached their destination? How have these products become part of their new environment (naturally or by will)? How, in turn, have new products and knowledge traveled back transforming landscapes and food practices that are now deeply ingrained in national imaginaries and how we understand traditional dishes or ingredients? This roundtable considers these questions as a starting point to think through together how these movements, unsurprisingly, happened at individual levels but also as consequences of systemic power changes, political interests, and the need for survival.

Dr. Lara Anderson is an associate Professor in the Spanish and Latin American Studies program at the University of Melbourne. Her main research area is Spanish food culture, and her most recent monograph, with University of Toronto Press, looks at food discourse as both a site of control and resistance during the first two decades of the Franco regime. She has published extensively on many aspects of Spanish food discourse, such as culinary nationalism, food and politics, and food and gender in leading international journals. She has also co-edited a journal issue titled “Transhispanic Food Cultural Studies,” which delineates the emerging field of Hispanic Cultural Food Studies, inserting Hispanist voices into the arena of food studies and making food central to a praxis of cultural studies in the transhispanic world. She also writes about Australian food culture, in particular food multiculturalism, culinary xenophobia and refugee and migrant food initiatives. She has written, too, about Latin American food culture in the context of Australian food multiculturalism

Dr. Rebecca Earle is a historian of food. She recently completed a ridiculously extended project on the global history of the potato, which considers both the processes that led to the Andean potato becoming a major global foodstuff, and also the historical origins of the concept of food security. She also worked on food’s role in shaping colonial Spanish American culture, the use of the indigenous past in the construction of nationalist narratives in postcolonial Spanish America, and the wars of independence in early nineteenth-century Spanish America. She’s also written about the intersections between clothing and identity, early modern travel, love letters, and other topics. Her next research project was going to explore what we can learn from recipes other than how to cook, but she’s been diverted into tracing the history of some unusual Mexican ‘casta’ paintings that made their way to the UK in the eighteenth century.

Dr. Melissa Fuster’s research examines the contextual factors influencing food practices and the policies and interventions implemented to improve them. This work applies a multidisciplinary and intersectional approach to examine underlying social determinants of diet-related health inequities, with a focus on Latin American communities and its diaspora communities. Her community-based research experience has sought to address diet-related disparities, aiming to shift emphasis to upstream approaches that engage the structural factors that underlie access to healthy food and high-quality healthcare. This was the subject of her first book, Caribeños at the Table: How Migration, Health, and Race Intersect in New York City. Building on this work, Dr. Fuster’s is currently tackling food access issues via the Latin American Restaurants in Action (LARiA) Project, supported by an NIH/NHLBI Career Development (K01) Award. The LARiA Project applies systems science, design thinking, and implementation sciences to engage Latin restaurants in designing and implementing innovations to facilitate healthier eating. Additionally, she also engages in research examining nutrition expert perceptions and practice, and food policy implementation. She completed her Ph.D. in Food Policy and Applied Nutrition at the Tufts University Friedman School of Nutrition Science and Policy, and a post-doctoral fellowship in food studies at New York University. Before joining the faculty at Tulane, she was an Assistant Professor at the City University of New York Brooklyn College.

Dr. H. Rosi Song holds a Chair in Hispanic Studies at Durham University. A specialist in 20th and 21st century Spanish culture and literature, she is the author of Lost in Transition: Constructing Memory in Contemporary Spain (Liverpool UP, 2016) and the co-editor of Traces of Contamination: Unearthing Francoist Legacy in Contemporary Spanish Discourse (Bucknell UP, 2005) and Towards a Cultural Archive of la Movida: Back to the Future (Farleigh Dickinson UP, 2013). She is one of the Series Editors for Culinaria, a new book series from the University of Toronto Press on Food Studies and serves on the editorial board for Toronto Iberic Series as well. Her most recent book, co-written with Anna Riera, is A Taste of Barcelona. The History of Catalan Cooking and Eating (Rowman and Littlefield, 2019). 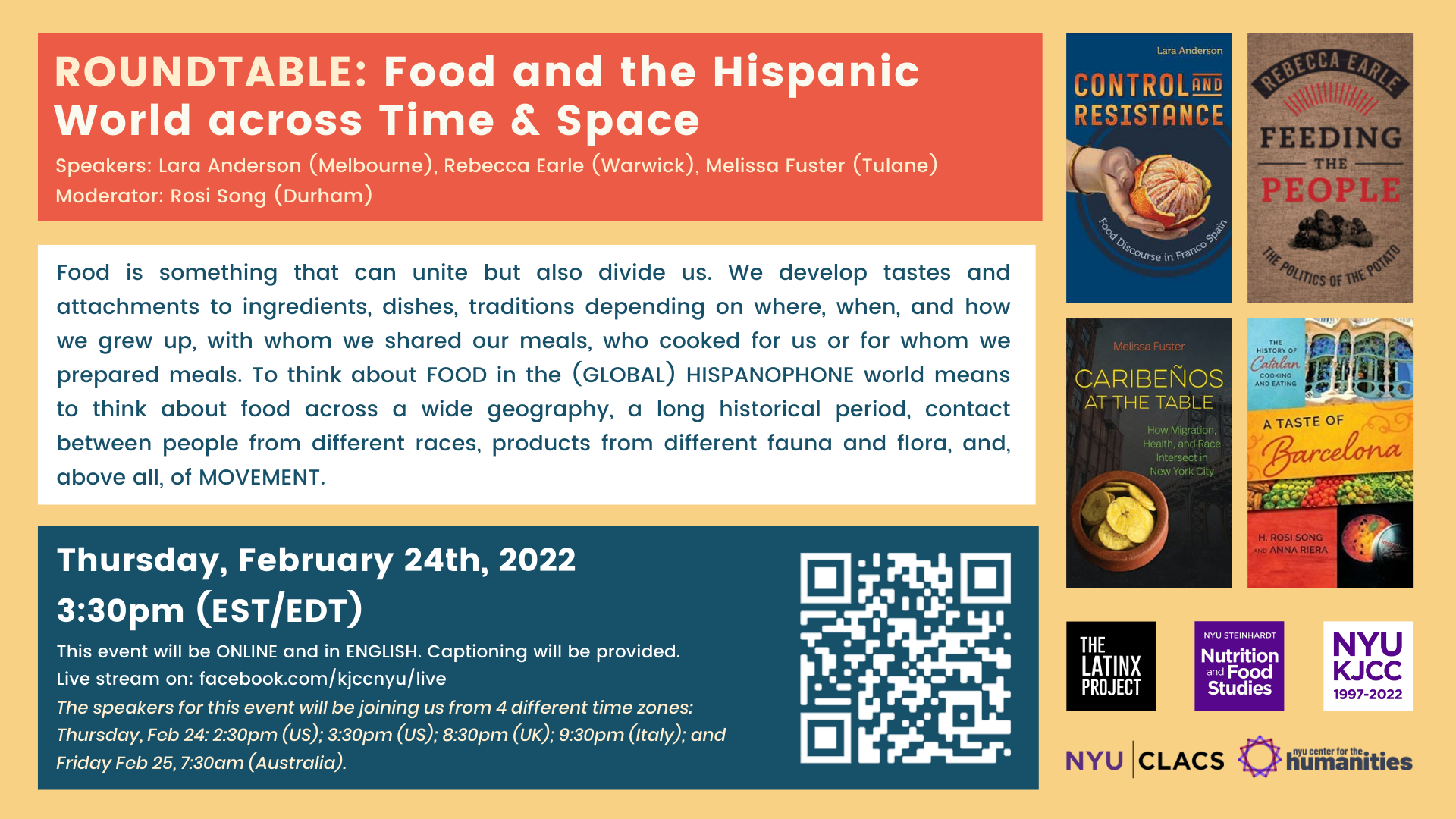