Emanuelle Santos, Senior Lecturer in Modern Languages at University of Birmingham, presents the talk “Late Postcoloniality: The Postcolonial Condition in the Aftermath of Independence in Portuguese-speaking Africa” as part of the lecture series “Charting the Portuguese Black Atlantic" at New York University.

The analysis of cultural forms taken by the structural inequality in the relationship between colonized people and colonizers is backbone of postcolonial studies.  Many are the studies and theories in the field dedicated to expose, describe and deconstruct cultural formations of imperialist logic. Equally, numerous are the works dedicated celebrate, analyze and understand the various forms resistance developed by colonized people across the globe. Yet, scholars interested in the making of theory seem much less interested in understanding the dynamics between domination and resistance that take place in the postcolony, considering postcolonial agency and internal dynamics in the longue durée of postcoloniality. In this paper, I take up the challenge to discuss the contemporary postcolonial condition as registered by post-2000’s literary works for the countries of Portuguese-speaking Africa, and argue for the need of a transformation in terms of the traditional range and approach of postcolonial studies if it is to remain relevant as a lens through which to understand the postcolonial condition in the peripheries of the world-system today.

Emanuelle Santos an Assistant Professor (Senior Lecturer) in Modern Languages at the University of Birmingham, UK. Her research focuses on the intersections between the cultures of the Portuguese-speaking world, postcolonial studies, and theories of world literature, drawing attention to the global-local dialectics in epistemology, and literary and critical theory. Her work also addresses representations of race, gender and sexuality, memory studies, world-systems theory, and decolonial critique especially with regards to structures of inequality, oppression and hegemony. Her first book Late Postcoloniality: State, Violence and Wealth in the Literatures of early 21st Century Portuguese-speaking Africa (Peter Lang) is currently under preparation to be published in 2022.

NYU Department of Spanish and Portuguese

NYU Center for the Study of Africa and the African Diaspora 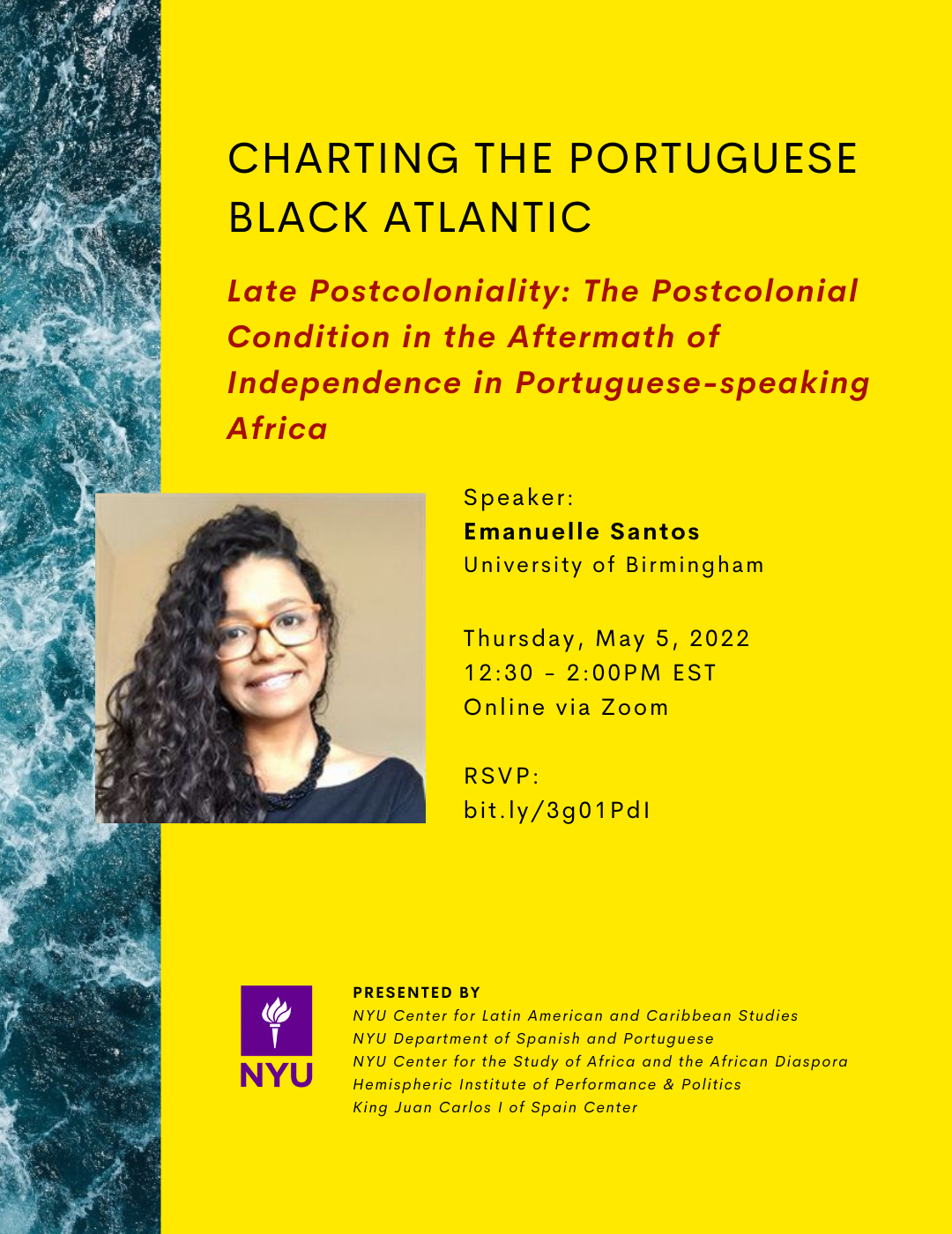