On May 19, 2014, the Edward J. McNelis Thesis Prize in Chemistry was presented to Sabrine Obbad at the New York University Department of Chemistry Graduation Ceremony.

Edward J. McNelis was Professor of Chemistry at New York University from 1967-2003.  An active scholar and devoted teacher, Professor McNelis made numerous contributions at many levels.  While his research was focused in organic chemistry, he was an intellectual whose interests were broad.  He was Department Chair in the when he provided leadership in all aspects of our department.  In honor of the contribution of Professor McNelis to academia, this prize is designed to encourage students to pursue research in the chemical sciences at the graduate level and beyond.

The Edward J. McNelis Thesis Prize in Chemistry was established with generous gifts from Professor McNelis’ sons, Joseph and John.  While the memorial award was Joseph's brainchild, it was John who personally presented the award to Rachel in May (pictured below).  Joseph is a gastroenterologist who relocated with his family to Fargo, North Dakota last year.  John is the Chairman of Surgery at the North Bronx Healthcare Network and a member of the faculty at SUNY Stony Brook and Albert Einstein College of Medicine.

The prize includes $1,000 and a commemorative award.  The design on the award (pictured on the left) includes a typical product of a reaction known as “The McNelis Rearrangement,” coined by Professor Gerald F. Koser of The University of Akron, in his review article in the anniversary issue of Aldrichimica Acta, "1951-2001: Fifty Years of Chemists Helping Chemists."  The McNelis Rearrangement was discovered with the assistance of Pakorn Bovonsombat, a graduate student in Professor McNelis' lab at the time.  Pakorn is currently the Chair of the Science Division at Mahidol University in Thailand, and we thank him for his contribution toward honoring the memory of his beloved advisor.

Although Sabrine did not have the pleasure of working with Professor McNelis, she enjoyed the mentorship of his colleague, Professor Ned Seeman, and the guidance of Dr. Yoel Ohayon and graduate student Arun Richard Chandrasekaran.  Her thesis is entitled, "Creating Higher Resolution Self-Assembled Crystals from Larger DNA Motifs."  We are that she will pursue a doctoral degree in the New York University Department of Chemistry.  Congratulations to Sabrine! 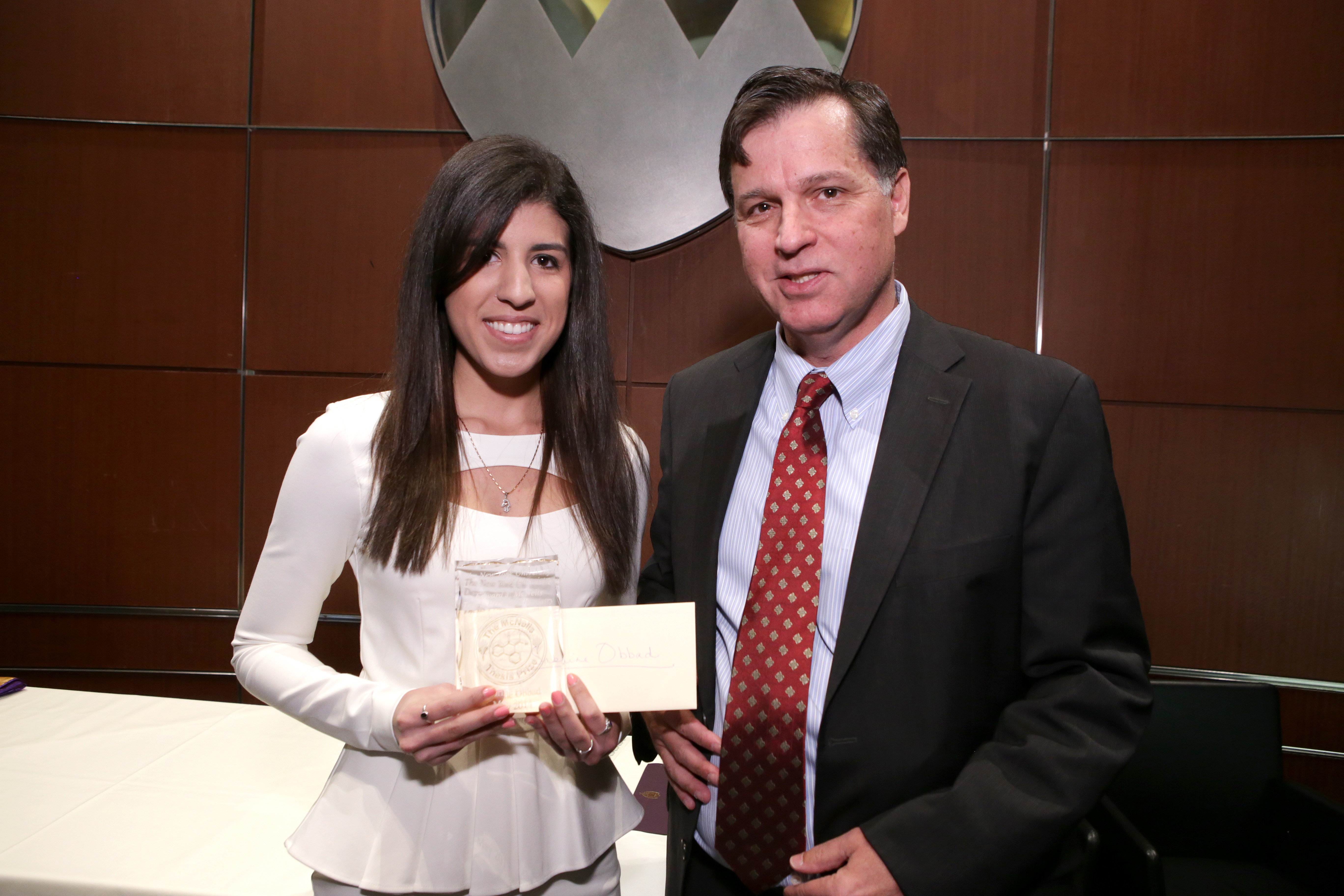