A ubiquitous family of bacteria, including the causative agent of anthrax and the most common cause of hospital-acquired infections in the United States, form spores that are extremely resistant to disinfection.  These small spherical spores are protected by a coating of over 70 individual proteins in the model organism Bacillus subtilis.  In the current issue of Molecular Microbiology, CGSB scientists Peter McKenney and Patrick Eichenberger report their discovery that the coat initially assembles a scaffold cap containing all four layers on one hemisphere of the spore.  Previous work showed that the spore coat is organized into four distinct layers.  The scaffold eventually forms a spherical shell of protein through four distinct transitions in which each spore coat layer successively encases the spore, beginning with the innermost layer and ending with the outermost layer.  The timing of each transition appears to be linked to successive waves of transcription of the underlying spore coat genes. Their paper is In the current issue of Molecular Microbiology http://onlinelibrary.wiley.com/doi/10.1111/j.1365-2958.2011.07936.x/abstract, and was highlighted in an accompanying MicroCommentary http://onlinelibrary.wiley.com/doi/10.1111/j.1365-2958.2011.07948.x/abstract, as “a landmark and thorough study of this process, and one that likely has implications for the assembly of complex macromolecular structures in other systems as well”. 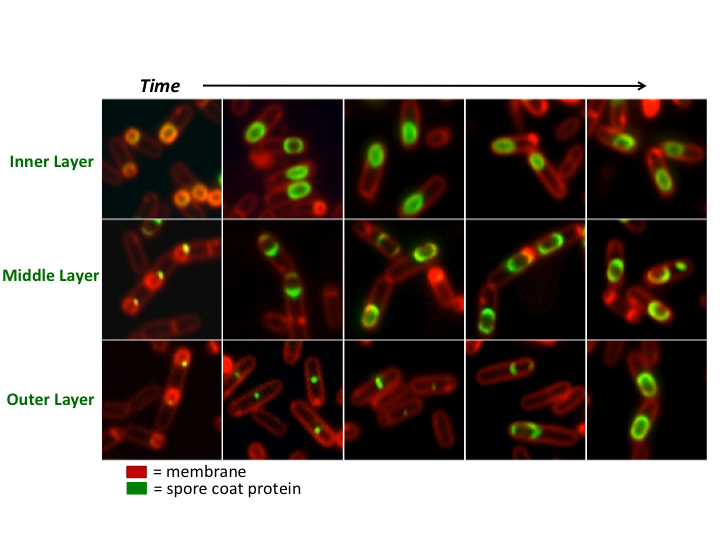