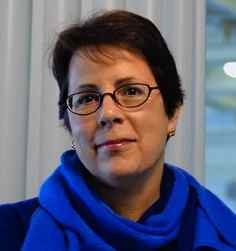 Leslie is the Burial Sites Archaeologist for the Wisconsin Historical Society and is an Honorary Fellow in the Department of Anthropology at the University of Wisconsin-Madison.  She received her advanced education and training from New York University and was granted Board Certification in Forensic Anthropology from the American Board of Forensic Anthropology, the only such credentialing body in North America.  Among numerous professional commitments, Leslie serves on the 20-member Scientific Working Group for Forensic Anthropology, jointly sponsored by the Federal Bureau of Investigation and the Joint POW/MIA Accounting Command in Hawaii, whose current goal is to develop guidelines for the practice of forensic anthropology.  She is an active member of the federal Disaster Mortuary Operational Response Team (DMORT Region V) that deployed to New York City in 2001 immediately following the World Trade Center attacks, and to southern Mississippi following Hurricane Katrina, and also serves as a volunteer member of the Cook County (IL) Disaster Response Team.  Leslie, a Fellow of the American Academy of Forensic Sciences (Physical Anthropology Section) and a Registered Professional Archaeologist, serves as a consultant to law enforcement in Wisconsin and other jurisdictions.