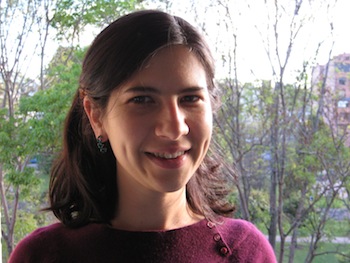 Bodies at War: An Ethnography on Rehabilitiation After Landmine Injury in Columbia

Brooklyn-based filmmaker and anthropologist, Emily Cohen, writes scholarship and makes socially relevant documentaries that reflect her interests in activism, science and technology, and the social consequences of war. She is an Assistant Professor of Anthropology at LaGuardia Community College, CUNY and a graduate of New York University’s doctoral program in Anthropology and the Culture and Media Program. She is completing revisions on her book, “Bodies at War: An Ethnography” which tracks the spectacular rise of the prosthetic industry and rehabilitation medicine in Colombia as it becomes recognized as one of the countries with the highest incidence of landmine injuries in the world. Her new project, “Military Utopias of Mind and Machine” focuses on the rise of military utopic visions of mind that involve the creation of virtual worlds and hyper real simulations in military psychiatry. Her research and filmmaking have been supported by the National Science Foundation, Wenner-Gren Foundation for Anthropological Research, the American Council for Learned Societies, NYU Torch Prize, and Fulbright Colombia. Dr. Cohen was a Flaherty Fellow at the Flaherty Film Seminar in 2012.